The Chiefs fought back from 34-10 down to draw 43-43 in an absorbing Super Rugby game in Bloemfontein.

In what has to be one a rugby anomaly for the record books, the Chiefs on Saturday recorded their second Super Rugby draw in as many matches.

After a scintillating fightback against the Bulls last week, the defending champions bounced back from a shocking first-half performance to secure a draw against a resurgent Cheetahs outfit.

The man who stepped his side out of what looked like a certain defeat was none other than Tim Nanai-Williams who, in his final touch of the match, raced in under the posts to ensure his side would end their tour of South Africa undefeated and winless.

Nanai-Williams' first try marked the start of his team's fightback.

For the Cheetahs, who controlled matters for most of the match, they will be gutted that were denied what would have been their first ever win against the Hamilton based squad.

The home side started superbly with Pretorius sniping around a ruck fringe to give his side the early lead.

The livewire scrum-half dictated proceedings throughout a first half through his outstanding ball distribution and awareness of space on the field.

He was constantly asking questions of a somewhat lacklustre Chiefs defence and when he wasn't doing great things with ball in hand, he added some sting to the contact areas where he often - quite mysteriously - snatched possession from some of the biggest men on the field.

The Cheetahs scored their second five-pointer through Ryno Benjamin who, like Pretorius, enjoyed a splendid day on the field.

Benjamin capitalised after a stray kick landed in the lap of Willie le Roux, although on that occasion the pass may have drifted forward.

Apart from an Aaron Cruden penalty the defending champions had very little say in the opening period that was marked with some outstanding work at scrum time by the Cheetahs pack.

From that facet fly-half Johan Goosen had the chance to further extend his team's lead, but was only successful with one of his the two penalties the Cheetahs pack earned.

It took 20 minutes for the visitors to score their first try and, in true Pretorius fashion, Chiefs scrum-half Augustine Pulu caught the defence napping as he sneaked around the side of a ruck.

After another successful Goosen penalty the Pretorius show continued as he first drove the visitors back with a perfectly timed run from the base of a scrum at the halfway line, before chipping through to ensure his side could contest a line-out metres from the Chiefs line.

Pretorius' second try almost looked like a carbon copy of the first.

With their forwards dominating both set-phase and the tackle area - the Cheetahs counter-rucked as if their lives depended on it - they were soon rewarded with a try from a rolling-maul and the smile on try-scorer Boom Prinsloo's face told a story of a team that truly believed they could beat the back-to-back champions against all odds.

At half-time the Cheetahs enjoyed a 34-10 lead.

To their detriment the Cheetahs failed to maintain the same intensity after the break and it was only a matter of time before Pulu, like Pretorius, would score his second try of the match.

Still the advantage the men from Bloemfontein enjoyed was substantial, but their execution in the game became somewhat cumbersome.

Instead enhancing their game, the Free State replacements failed to make the desired impact while a certain amount of calm would return to the lads from Waikato once the legendary Mills Muliaina eventually joined the team from the bench.

As the roles reversed, the Chiefs started spreading the ball wider and soon Nanai-Williams ignited the fight back that seemed a long shot after the first 40.

Nanai-Williams chipped the Cheetahs defence after a stunning cut-out pass from Curden gave him some space to play to his well documented potential.

Fellow winger Asaeli Tikoirotuma followed suit as the home side could no longer hide their fatigue.

The light-footed speedster would go over for two tries that resulted in the drama filled finale while the home side depended on Goosen's boot to stay in the game. 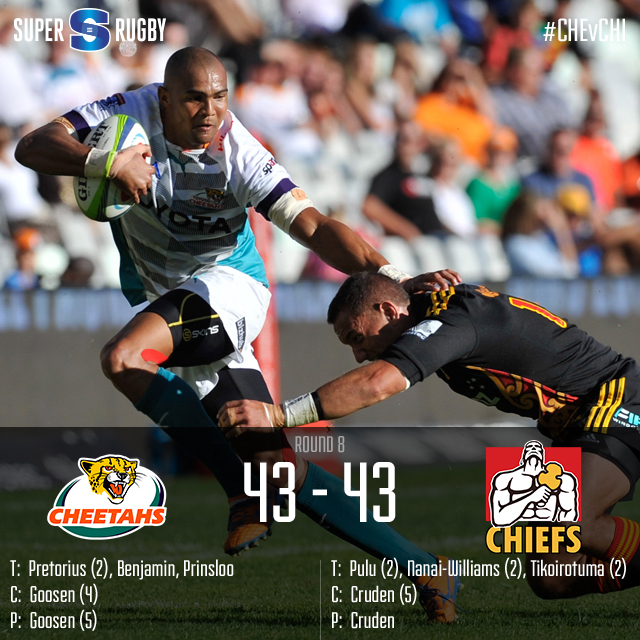