The Chiefs secured the final Super Rugby semi-final berth when they claimed a 17-11 victory over the Stormers in Cape Town on Saturday.

In a closely contested and attritional battle, both sides scored a try apiece with Damian McKenzie's boot proving the difference in the end as he finished with a 12-point haul, courtesy of four penalties.

The Chiefs led 9-3 at half-time thanks to three penalties from McKenzie with the Stormers' only points coming via the boot of SP Marais.

The opening exchanges was a measured affair as both sides battled to gain the ascendancy and although the Stormers had the bulk of the possession during the opening quarter, neither side could score any points during this period.

The home side eventually took the lead in the 24th minute courtesy of a Marais penalty but on the hour-mark McKenzie restored parity with a three-pointer off the kicking tee.

Shortly afterwards, the Stormers were penalised at the breakdown and McKenzie slotted his second penalty which meant the hosts held a slender three-point lead as the half draw to a close.

And on the stroke of half-time, McKenzie succeeded with his third shot at goal - after Damian de Allende was blown up for illegal play at a ruck inside his 22 - which meant the Chiefs held a slight edge as the teams changed sides at the interval.

The Stormers were fastest out of the blocks in the second half and piled on the pressure with pick up and goes from their forwards shortly after the restart.

That tactic soon reaped rewards and after taking the ball through numerous phases deep inside the Chiefs' 22, Dewaldt Duvenhage got a pass out to EW Viljoen who drew in the final defender before offloading to Siya Kolisi who crossed in the right-hand corner.

Marais failed to convert and three minutes later, McKenzie slotted his fourth penalty after the Stormers' backs strayed offside on defence. The next 10 minutes was a war of attrition but neither side scored points during this period.

The Chiefs suffered a setback on the hour-mark when Sam Cane was sent to the sin bin for a dangerous tackle on Dillyn Leyds. And although the Stormers spent most of the next 10 minutes camped inside the Chiefs' half, a 63rd minute penalty from Marais was the only points they could score during this period.

Marais had an opportunity to give his side the lead from the kicking tee just before Cane returned from his stint on the sidelines but he pushed his penalty attempt wide of the uprights.

That proved costly as four minutes before full-time, the Chiefs launched an attack inside the Stormers' 22 and Aaron Cruden caught the home side's defence napping when he threw a perfectly-weighted long pass to Stevenson who cantered over the whitewash for the match-winning try. 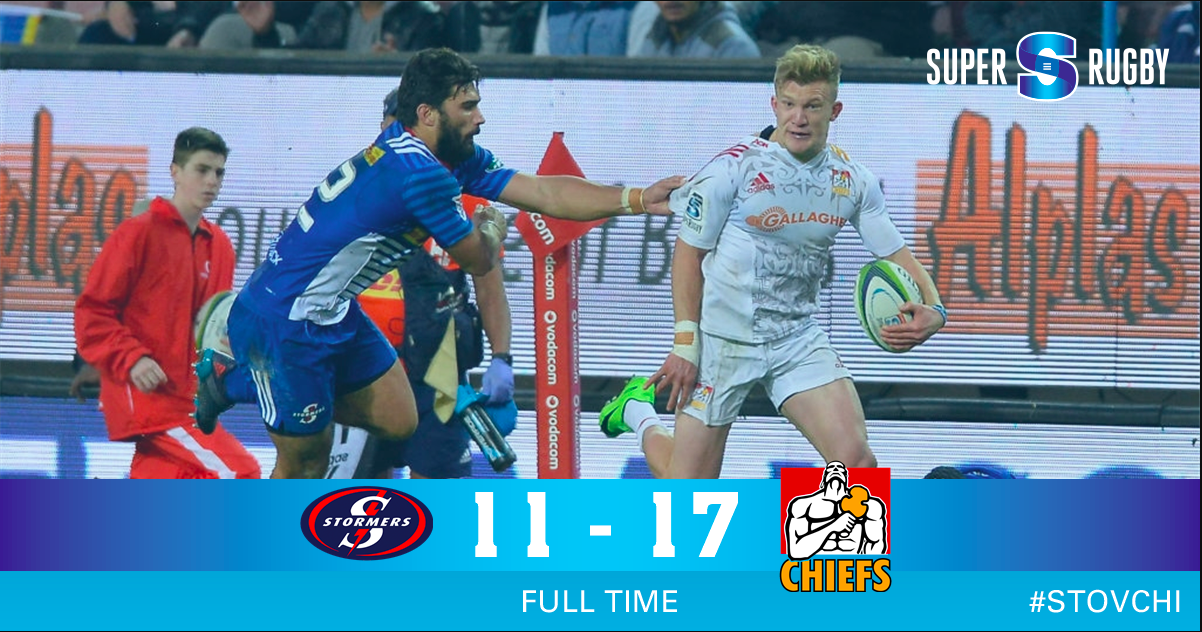