The Crusaders secured top spot in the New Zealand Super Rugby Conference on Saturday thanks to a 34-8 win over the Highlanders.

The bonus-point win also virtually assures the seven-time champions of a home Semi-Final as it means the Sharks must now score at least four tries and beat the Stormers by 35 points at DHL Newlands later on Saturday.

Indeed, the Highlanders - who will finish sixth overall - and are now likely to travel to Durban to face the Sharks next weekend.

The Crusaders led 17-3 at the interval thanks to a handful of Dan Carter penalties and a Matt Todd try on the stroke of half time.

A second try for Todd and another for Nemani Nadolo early in the second half essentially settled the result for Crusaders.

Richard Buckman pulled a late try back for the Highlanders but the home side weren't to be denied that crucial fourth try as departing stalwart Corey Flynn touched down to cap a dominant display by the men in red.

Crusaders were ahead 6-3 at the end of the first quarter thanks to two Carter penalties while Hayden Parker replied with one for the visitors.

The Highlanders were forced to make a lot of tackles under relentless pressure from the home side and Carter could double his tally to put the Crusaders up 12-3 with half time looming.

Skipper Kieran Read made a crucial call just before the break, choosing to kick for the corner from another penalty. It paid off as the Crusaders pack rumbled over after a textbook line-out and maul with Todd touching down.

Carter pushed his conversion attempt wide, but with a 14-point lead, the Crusaders were sitting pretty as the teams swapped ends.

Todd bagged his second try of the game in similar circumstances to the first as he broke off a maul to barge his way over.

Carter added the conversion this time and the Crusaders essentially sealed the result with their third try soon thereafter.

PHOTO: Not the Highlanders' night, but @MalakaiFekitoa featured in every minute (1280) of the #SuperRugby season. pic.twitter.com/1P3d0x8nkO

Andy Ellis took a tap penalty just inside the Highlanders' half, and Carter, Israel Dagg and Read played a part before the latter found the flying Nadolo, who raced home.

At 29-3, the Highlanders were out of it but the visitors kept fighting and finally got over the whitewash with 15 minutes left to play as Buckman beat three defenders to score in the corner.

The Crusaders line-out was once against the source of points for their fourth try. It was fitting that Flynn, a long servant of the Christchurch franchise, was the man to peel away from the drive to crash over and secure the bonus point. 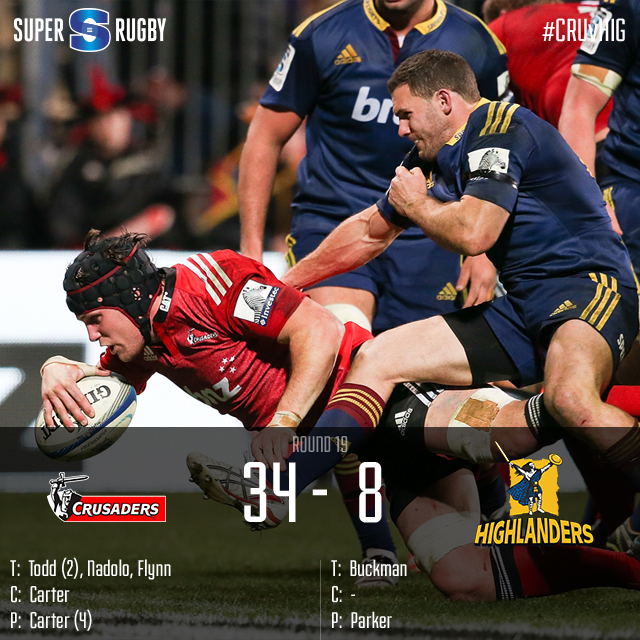