The Western Force were able to just see off a willing Kings side to win 46-41 in a thriller at nib Stadium in Perth.

It was a scintillating match of rugby that saw to end-to-end tries being scored with 11 being dotted down. No one could have predicted how the fixture would end after each team snatched the lead from the other.

The Southern Kings produced possibly one of their finest attacking performances of the season after running the ball beautifully throughout with the home side hanging in the game through some strong forwards play. Malcolm Jaer was sensational in the clash after picking up a hat trick after making sure he was in the right place at the right time.

With their win the Western Force now jump to second in an under-performing Australian Conference with nine points, behind the Brumbies on 16. While the Kings pick up a losing-bonus point after being within seven points of the Force.

It was a quiet first ten minutes after nether side could get on the score sheet but the Western Force would be first the side to draw blood after Jono Lance scored a penalty, a try and a conversion in succession to get his side an early 10-0 lead.

The home side looked in control of the game till the Kings turned up the pressure and after attacking in the Force half for ten minutes they finally made it over through Justin Forwood after a line out drive with Lionel Cronje converting.

The Western Force would go into the second half with the psychological and points advantage after they finally strung together a cohesive movement and spread the ball wide for the young winger Alex Newsome to score with Lance missing the two points.

The Kings came back with a vengeance after the second half as they claimed two quick tries. First Yaw Penxe showed some electric pace to burn past the Force defence after Conje made a line break off the kick-off and passed it wide to the young winger to run in before Schreuder made a fantastic break who offloaded to Jaer to dive over.

The Western Force struck back quickly to regain the lead after running the ball back from a Kings clearance, making it to the Kings line and Dane Haylett-Petty barged over.

The Kings took the lead once again minutes later after a fluffed line out from the Force which Andile Ntsila pounced on. The visitors spread it wide and Cronje put in a grubber for Makazole Mapimpi to run onto to score.

The Western Force retook the lead after the Kings were penalised at the breakdown and Lance knocked over a penalty.

To stick with the story of the game the Kings got in front again when Jaer score two tries in a row. Cronje showed some Carlo Spencer-esque skill after dummying the ball by swinging it around his body before putting in a grubber for Jaer to pick up and dot down with. The Kings then swung the ball and Jaer collected and burnt around Haylett-Petty and ran for 20 metres to nab his hat trick. 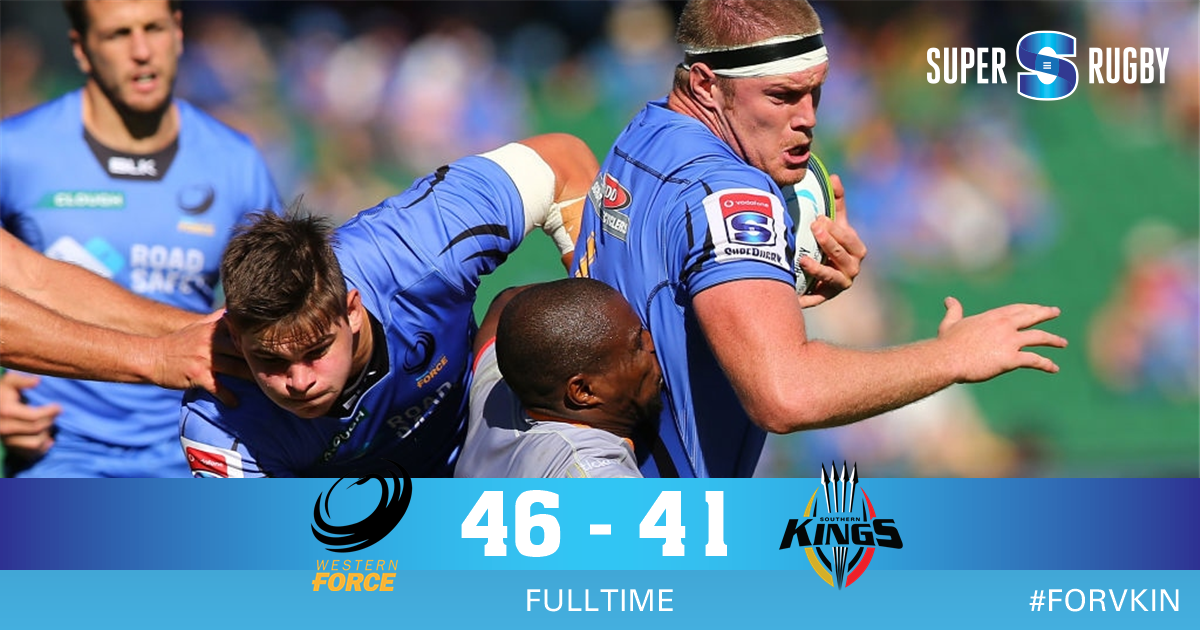 The Force responded in ideal fashion after Newsome grabbed his second. The young winger put in a grubber around the Kings defence and collected to score.

The Force then took the lead after a penalty try when the scrum went awry too many times on the Kings line. They seemed to have put the final nail in the Kings' coffin after getting a penalty, kicking it into touch and used a driving maul to barge over the Kings line with Ben McCalman scoring.

The Kings put themselves within victory territory once again after Pek Cowan was penalised for being offsides and Cronje slotted the three pointer from 40 metres out. But the Western Force closed them down before kicking the ball into touch on the siren.