The Force claimed only their third victory of the season and first away from home as they overcame the Jaguares in Buenos Aires, winning 16-6 at Vélez Sarsfield.

Victory remarkably gives the Force renewed hope in the Australian Conference as they are now six points off the pace-setting Brumbies.

After last week's 46-39 win over the Sunwolves, to witness a first-half that saw just three points scored was a shock in Buenos Aires.

Those points came via a Prior penalty as the Force held their own against an international-filled home side, who made too many mistakes.

The Jaguares did look to flex their muscles early on with a line-out drive but good defensive work from the Force foiled their first attempt.

The Force then grew into the game, taking an attacking scrum five metres out. However number eight Richard Hardwick fumbled over the line, much to his dismay, as this time it was the Jaguares who dodged a bullet. So with 20 minutes gone there was still no score to speak of.

A yellow card for Force lock Richie Arnold for tackling Batista Ezcurra early - coming after Tomás Lezana's strong run - hinted that the drought might be nearing its end for the Jaguares. But again the line-out drive didn't work and the Force repelled them with somewhat ease.

In fact the Australians would go down to the other end of the field and nail a penalty after a ruck offence on 36 minutes, making it 3-0, before Jaguares full-back Joaquín Tuculet came close to scoring a try on the left wing in the last play but for centre Curtis Rona's fine tackle.

The second 40 began in controversial fashion as half-time replacement James Verity-Amm, who came on for Lance, was denied a try after referee Ben O'Keefe adjudged Tetera Faulkner to have blocked Tuculet as he was attempting to regather his own kick earlier in the play.

Undeterred the Force almost crossed again three minutes later when Hardwick went close, being tackled and then held up over the line. 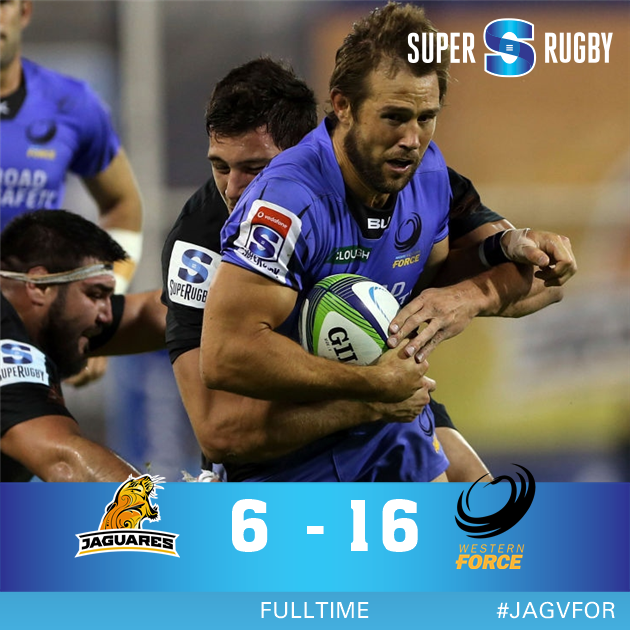 The Jaguares responded and finally put points to their name on 49 minutes after a high shot on Martín Landajo led to Hernández kicking a penalty. Prior was unable to chalk that off soon after from wide out, after Jaguares tighthead prop Ramiro Herrera was penalised for a push.

Force scrum-half Prior was successful, however, on the hour as a powerful scrum on the Jaguares ten-metre saw him make no mistake for 6-3. This time though it was the turn over the Jaguares to try and respond soon after and Hernández had a simple effort to make it 6-6.

With time ticking on it seemed the clash was set to remain try-less, but that prospect ended on 68 minutes when a smart break from Prior led to him offloading to Newsome who finished well on the right wing. Prior missed the conversion attempt so it was only an 11-6 cushion.

But the result was sealed on 75 minutes when replacement lock Naisarani forced his way over to make it 16-6, which was how it remained.