Force start tour with a win

The Force kicked off their tour of South Africa with their first victory in Bloemfontein since 2008, beating the Cheetahs 23-16 at Free State Stadium.

The result - Perth side's seventh win this season - sees the Force leap up to fourth in the overall standings.

The visitors outscored the Cheetahs two tries to one as they made the Free Staters pay for an error-strewn display.

Claiming another South African scalp, after beating the Bulls in Perth two weeks ago, the Force will take valuable momentum with them into their upcoming game against the Stormers next weekend in Cape Town.

The visitors started at a steady pace, playing the sort of attacking rugby that serves as testimony to their performances so far in the competition.

They applied pressure to grab an early lead of 3-0 after fly-half Sias Ebersohn kicked a penalty.

The Cheetahs woke from their winter sleep and put together some impressive phases of play. It forced the visitors to infringe and the resulting penalties gave Cheetahs fly-half Johan Goosen the opportunity to kick at goal.

Goosen missed his first attempt, but slotted his second shortly afterwards to level the scores.

An accidental off-side by the Force robbed them of their first try of the game, but they received a consolation prize when Ebersohn kicked his second penalty resulting from pressure applied by the Australian side.

The Cheetahs struggled to secure their possession at the break down area and the Force uses every turnover opportunity to launch their attacks.

Their enterprising play paid off when fullback Jayden Hayward rounded off a counterattack in the corner, 15 minutes before half time. Ebersohn converted to leave the Cheetahs trailing by ten points.

The hosts played some exciting running rugby, but the Force were extremely organised in defence and many of the Cheetahs' chances went begging. They also struggled at scrum time and conceded numerous penalties even though they were bolstered by Springbok stalwarts Coenie Oosthuizen and Adriaan Strauss.

The Force opened up the lead to 13 points when Ebersohn kicked another penalty, but Goosen replied on the half-time whistle to see the Force head into the bleachers with a lead of 16-6.

The Cheetahs started the second half at a fierce pace and built up some good momentum. After Force flanker Matt Hodgson was yellow-carded for a professional foul, No. 8 Boom Prinsloo nudged over for the hosts after a good effort by flanker Teboho Mohoje. Goosen converted to leave his side trailing by just three points.

It was turnover possession that once again led to a Force try, with the Cheetahs having to turn around after being on the front foot. In the end winger Nick 'Honey Badger' Cummins rounded off after the Cheetahs could not patch the holes from the turnover. Ebersohn converted, leaving the hosts to trail by ten points once again.

Goosen reduced it to seven points with another penalty kick but the hosts still trailed by a converted try.

Despite numerous attacks, the Cheetahs could not breach the Force's defence and had to settle for a losing bonus point. 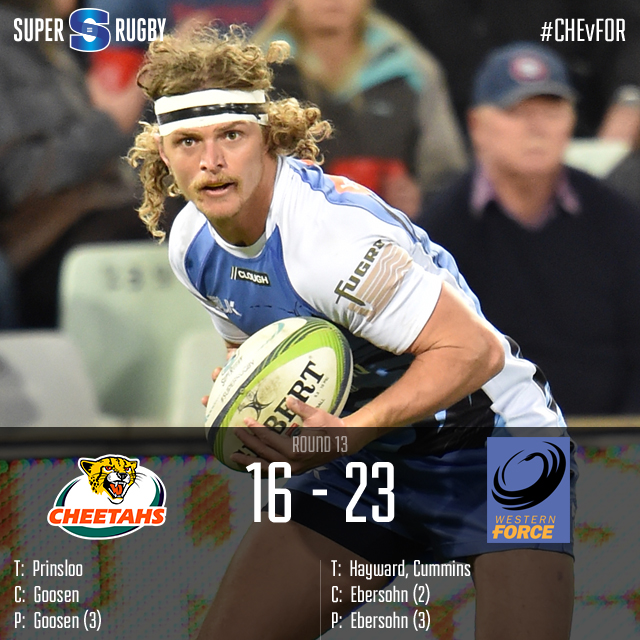