Force win at the Reds

The Force moved up to third position in the Australian Conference after they beat the Reds 40-26 at Suncorp Stadium in Brisbane on Friday.

Duncan Paia’aua, Lukhan Tui and Stephen Moore (2) went over for the Reds on a disappointing evening for them, with this their ninth loss.

The Force led 13-5 at the interval as they recovered well from an early Reds try, looking more like the side that won away to the Jaguares.

Paia'aua's crossing on five minutes for the Reds was created by fly-half Quade Cooper's delayed pass, but the Wallaby couldn't add the kick from the left sideline so it was a 5-0 advantage in an impressive start from the home side, who were looking for just their fourth victory.

It probably should have been at least 10-0 on 16 minutes when scrum-half Nick Frisby dived over the line in that same corner. However, an outstanding cover tackle from Force fly-half Grant managed to keep the ball up off the ground before he bundled Frisby into touch in-goal.

That appeared to rally the Force as they settled with three points from Grant off the tee just before the half-hour mark, cutting the gap.

Again though the Reds would then go close to a try as this time Cooper was denied after finding himself in an offside position at the ruck.

Grant was on target again three minutes later following a high tackle to make it 5-6 and before the break flanker Haylett-Petty went over from close range to hand the Force the advantage. Grant added the conversion so it was an eight-point lead for the visitors at half-time.

The Reds re-emerged for the second-half with intent after a talking to from head coach Nick Stiles immediately made it 12-13 when Frisby's great kick return led to Cooper finding second-row Tui on his inside for the seven points.

However, the Force hit back soon after with Frisby involved for the wrong reasons as he kicked the ball out of Michael Ruru's hands when he was attempting to dot down on the line. That led to a penalty try being awarded and Frisby being given a yellow card for his indiscretion.

Without needing to take a conversion, Grant's next kick was a penalty following offside on 48 minutes which took the Force 23-12 up.

That buffer was wiped off though in the next 10 minutes as two pushover tries from hooker Moore got the Reds in front at 26-23 in a sudden turnaround, with 20 minutes still remaining in a game that was becoming more open as it wore on.

And it was the Force who found the extra gear in the last quarter as a backline move saw Brache cross before Polota-Nau went over via the back of a maul to seal another memorable win in Brisbane for the Western Australian outfit. 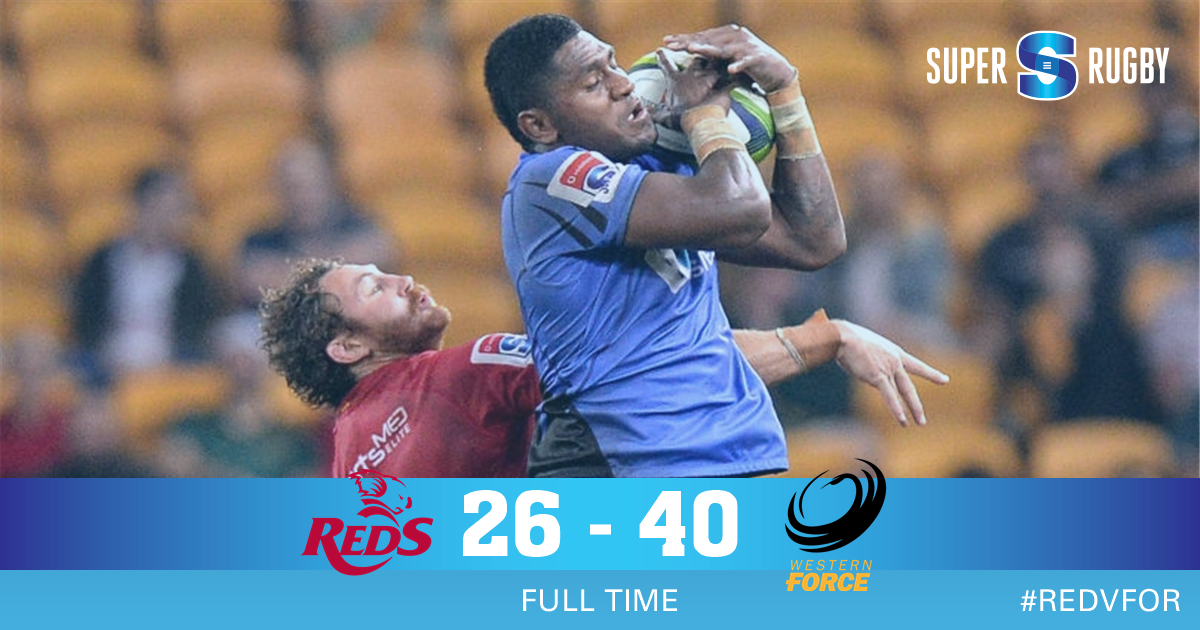