The Lions sealed a 26-13 four-try victory but they made heavy weather of seeing off the Sunwolves in Tokyo on Saturday.

Playing in their first ever Super Rugby clash, the Sunwolves were highly motivated and delivered a spirited display but, in the end, the experience of the visitors proved decisive especially in the final quarter when their opponents played with 14 men for 10 minutes after Tusi Pisi was sent to the sin bin.

Although the Lions outscored their hosts four tries to one, they could have had a bigger victory but Elton Jantjies had an off-day with the boot missing three shots at goal.

The Sunwolves gave a good account of themselves and were competitive in most facets of play, and judging from this display they could surprise some teams as the tournament progresses.

As expected, the Lions dominated the set-pieces and their first try - scored by Robbie Coetzee - came from the back of a powerful line-out drive deep inside the home side's 22 in the 20th minute after the Sunwolves got heir first Super Rugby points via a Tusi Pisi penalty 10 minutes earlier.

The Sunwolves thought they were heading for their first five-pointer in the 25th minute when Harumichi Tatekawa made a superb break, which put him in the clear inside the Lions' half, but he was called back by referee Ben O'Keeffe as their was obstruction in the build-up.

Jantjies then set-up the Lions' second try in the 34th minute, an inside pass from the pivot just outside the hosts 22 put Courtnall Skosan in the clear and the winger showed the cover defence a clean pair of heels before diving over.

Pisi narrowed the gap from the kicking tee five minutes later which meant the Lions led 12-6 at half-time.

The second half started brightly for the visitors when Warren Whiteley managed to free his arms in the tackle - inside the Sunwolves' 22 - and offloaded to the on-rushing Jaco Kriel who crossed for his side's third try.

The next 15 minutes didn't deliver anything exciting but the game came alive in the 60th minute when Shota Horie crossed for the Sunwolves' first ever try after running onto a pass from Atsushi Hiwasa close to the Lions' tryline.

Pisi added the extras which meant the Lions led 19-13 but the Sunwolves suffered a setback when their fly-half was yellow carded for a tackling offence in the 65th minute.

The Lions made their numerical advantage count when Lionel Mapoe barged over for his side's fourth try five minutes later which sealed his side's win. 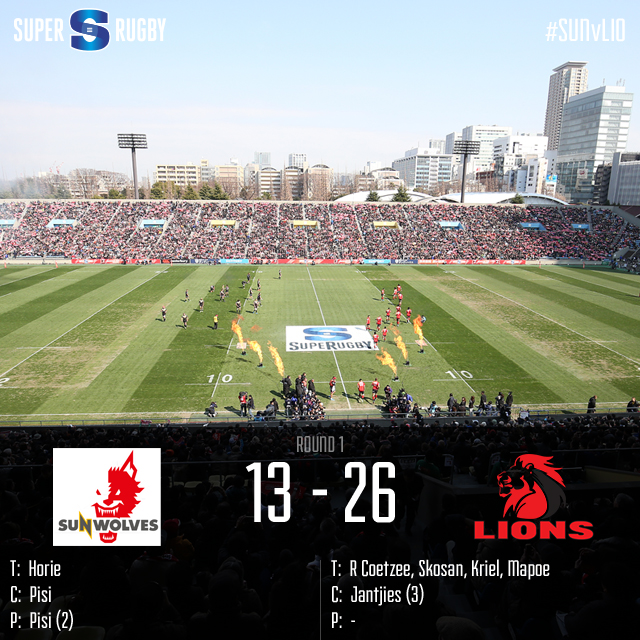