Warrick Gelant scored a hat-trick as the Bulls claimed a deserved 30-17 win over the Sharks in an entertaining South African derby in Durban on Friday.

The win is a momentous one for the men from Pretoria as it is their first away victory of the season and only their fourth one from 13 Super Rugby matches played.

Two tries from Gelant and another one from Nic de Jager helped the Bulls to a 17-10 lead at half-time with the Sharks' only try during this period scored by Thomas du Toit.

The Bulls did most of the early attacking and took the lead in the ninth minute albeit from an unforced error from the home side.

This after Franco Marais failed to find his jumper at a lineout which resulted in De Jager gathering at the back of the set-piece and his momentum took him over the whitewash despite a brave challenge from Cobus Reinach.

Tony Jantjies failed to convert and five minutes later, the young pivot's participation in this match was cut short when he was forced off the field through injury.

The Sharks responded shortly afterwards when Du Toit barged over from close quarters after Odwa Ndungane, Sbu Nkosi and Andre Oosthuizen did well in the build-up.

Curwin Bosch slotted the conversion but although the home side led 7-5, the Bulls were gradually gaining the upper hand and two minutes later, they regained the lead when they pounced on a mistake from Garth April,

The Sharks pivot launched a counter attack from inside his half and was soon inside the Bulls' half but a lost possession thanks to a fine cover tackle from Gelant.

Duncan Matthews gathered the loose ball and did well to draw in the final defender before offloading to Gelant, who got over for an easy five-pointer.

Tian Schoeman added the extras before Bosch reduced the defict via a penalty in the 25th minute. But the Bulls soon extended their lead when Gelant went over for his second try after gathering a pass from Jan Serfontein inside the Sharks' 22.

The second half started similarly to the first, with the Bulls fastest out of the blocks and a Schoeman penalty meant they led 20-10 by the 45th minute.

The Sharks were then dealt a blow when, from the restart, Nkosi played Matthews in the air and referee Angus Gardner had no hesitation in issuing a yellow card for that offence.

Despite their numerical disadvantage, the Sharks narrowed the gap when Bosch crossed the whitewash after Lourens Adriaanse took a quick throw-in at a lineout close to the Bulls' 10-metre line.

The ball was gathered by Chiliboy Ralepelle, who along with Du Toit were prominent in the build-up before the ball was taken wide to Bosch who had an easy run-in.

It did not take long for the Bulls to respond though - Serfontein running a great angle to the line before finding Gelant, who cantered in for his hat-trick.

Schoeman's conversion gave the visitors a 10-point lead and he sealed their win with a 71st minute penalty. 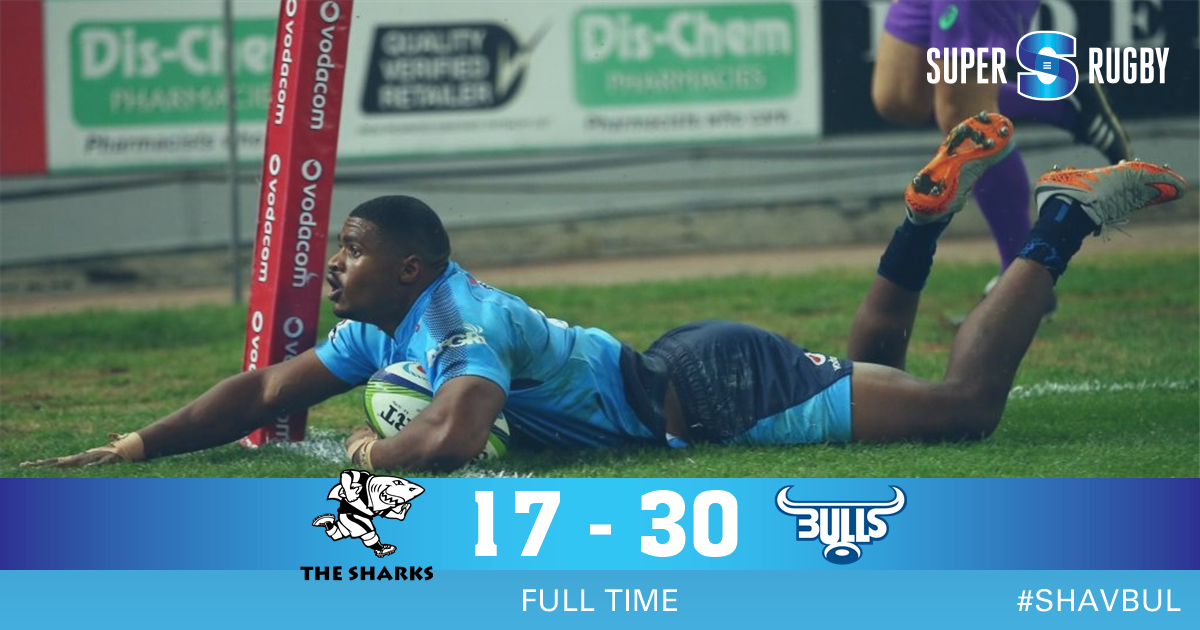