The Highlanders made it five wins in a row when they beat the spirited Sunwolves 40-15 at Invercargill Stadium.

The home side were guilty in the first-half of sending the ball out wide too early, not taking it up through the forwards enough, and should have scored more tries.

Perhaps they were a bit rusty from their bye last week and Highlanders assistant coach Scott McLeod admitted that they were definitely flattered by the 21-3 scoreline at half-time.

They stepped up their performance in the second-half, however, showing better build-up in their attacks and will be happy they achieved their aim of getting a bonus point before a crunch game with the Stormers next weekend. Centre Matt Faddes finished with two tries.

The Highlanders have now won 12 of their last 13 games at home against temas outside of New Zealand while the Sunwolves have now conceded 173 points in their last three fixtures against New Zealand opposition, and the gulf in class could not be more apparent.

The Sunwolves went behind as early as the third minute and it was due to their own mistake. They made a hash of their own lineout and after the Highlanders had turned over the ball, centre Faddes and classy winger Waisake Naholo showed good hands to put Malakai Fekitoa through the gap. No one was stopping Fekitoa as he raced through to dot down. Banks converted to put the home side into an early 7-0 lead.

Soon after, the Sunwolves would have counted themselves unlucky as the TMO cancelled out a try of their own due to an accidental offside.

But they soon had points on the board when they won a penalty after Liam Squire was penalised for having his hands in the ruck.

Yu Tamura stroked the penalty between the posts to put the score at 7-3 after 11 minutes.

Thereafter, the Sunwolves did well to match the Otago side man for man showing their organisation on defence. The Japanese side also did well to get under the skins of the Highlanders, a good tactic from the underdogs.

A case in point was their harassment of Aaron Smith, who appeared to be flustered by the constant Sunwolves pressure, knocking the ball on twice when the Highlanders were close to the Sunwolves' try-line.

The Highlanders almost butchered a clear-cut try-scoring opportunity not for the first time when they took advantage of a poor Sunwolves kick to launch a counter-attack. The ball went through the hands quickly onto the left wing where it looked as if the last pass from Tevita Li to Liam Squire was forward.

However, after it went upstairs, the TMO had a different idea, ruling it as a legitimate try which was a bit harsh on the Sunwolves. Marty Banks converted to make the score 14-3 in the 34th minute.

Aaron Smith then scored right on the stroke of half-time. From a stable Hghlanders scrum, the ball went nice and flat once again onto the left wing through the hands. Ben Smith handed off one defender before hurtling another, and good interplay from Faddes, Fekitoa and Aaron Smith ensured the scrum-half went over in the 41st minute.

Banks converted from all the way out on the touchline, showing his kicking ability as the sides went into the interval with the Highlanders 21-3 in the lead.

The hosts came out for the second-half with renewed impetus, however, and scored soon after the interval. Some beautiful running lines from the Highlanders and a nice flat ball from Smith allowed the exciting Faddes to receive the ball and run an angle to dot down in the 43rd minute. Banks slotted the ball between the posts to make it 28-3.

Faddes then showed his class once again, making a well-timed interception from the pass of Yu Tamura. He showed great calmness by waiting for the ball to bobble up, grasping it and then he showed his pace to run through from the half-way line and dot down in the 51st minute. Banks made it five conversions out of five, putting the score at 35-3. 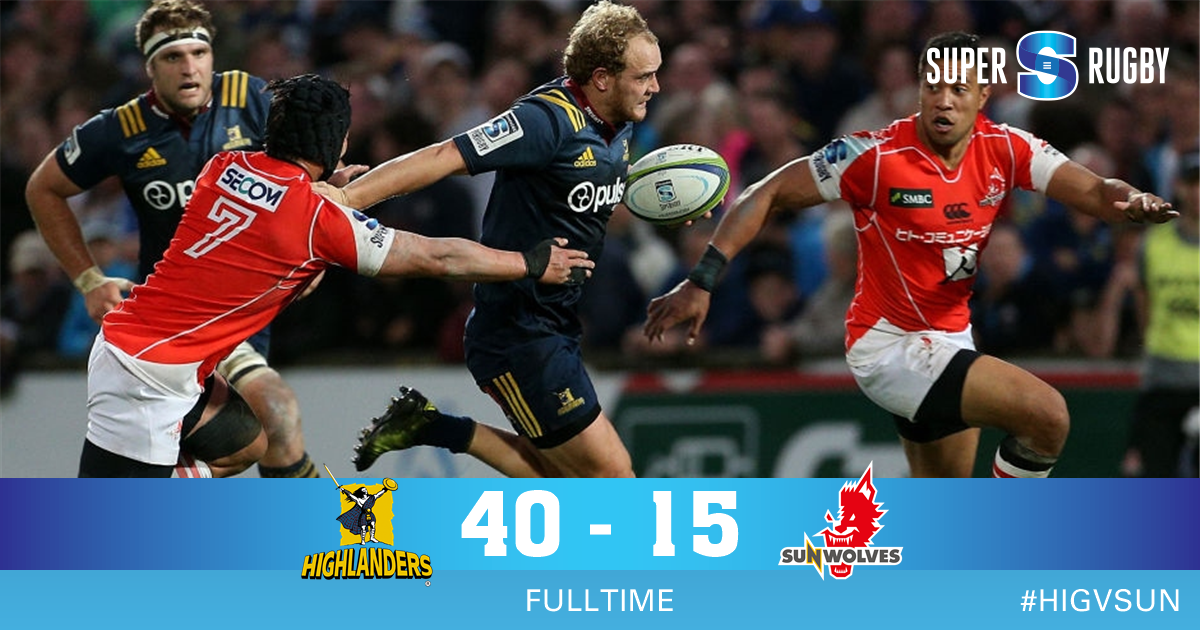 By now the floodgates had truly opened. Profiting on a Sunwolves' dropped ball, Tevita Li burst through offloading to prop Aki Seilu, who showed good awareness to spread it and the ball went out onto the right wing via quick hands. Fekitoa was brought down inches short, but Ben Smith's pick and go was enough to get him over in the 54th minute, making the score 40-3. Banks missed from the touchline to blemish his perfect record for not just the match, but the entire season so far.

South African Willie Britz then scored a try in his comeback game, going straight through Joe Wheeler before dotting down in the 59th minute. Tamura added the extras to make the score 40-10.

The Sunwolves did well to get another try, showing good character and fight having been down 40-3. Replacement back-row Rahboni Warren-Vosayaco went over in the 65th minute after good work down the right wing and a nice skip pass from Tamura.

Tamura missed the conversion, keeping the score at 40-15 as the Highlanders won with a bonus point.