The Hurricanes made it nine wins in a row against the Force with a 34-12 bonus-point victory at nib Stadium in Perth on Saturday.

Hurricanes' tries from Loni Uhila, Leni Apisai, Vince Aso, TJ Perenara and a Ngani Laumape brace proved too much for the Force who scored through tries from Dane Haylett-Petty and Richard Hardwick.

The result means the Hurricanes consolidate second position in the New Zealand conference as they edge closer to the playoffs while the Force miss an opportunity to go second on the Australian Conference and have been dealt another blow to their playoff hopes.

The Force, despite applying immense pressure on the Hurricanes try-line were denied time after time, as the away side managed to turn over the ball again and again. The Force should have had more points on the board as reward for their territorial dominance in the first-half.

But the 'Canes showed what made them champions; an ability to mix attacking flair with a stingy uncompromising defence. This desperation on defence hasn't been needed this season as they have blown teams out the water with their attack. Credit must go to the Force for bringing this out.

The result slightly flattered the Hurricanes who capitalised on their numerical advantage after a dubious yellow card was given to Dane Haylett Petty.

The Hurricanes profited on an errant lineout from the Force to score the first try of the game. TJ Perenara pounced on the loose ball, and immediately gave the ball to Jordie Barrett who offloaded for Laumape who was not going to be stopped by Dane Haylett-Petty. This, all after just two minutes on the clock. Beauden Barrett converted.

Despite persistent pressure from the Force, the Hurricanes showed incredible defence on their own try-line in a game of physical attrition as both sides put their bodies on the line.

Despite the 'Canes enjoying 13 percent of the territory in the first-half, they scored their second after only spending a minute on the Force try-line. Uhila used his massive frame to bash over from close range with the try assist coming from TJ Perenara.

Shortly after the resumption of the second half, The Force responded with their first try of the game. After the Force won a lineout on the Hurricanes 22, Peter Grant kicked high and the bounce favoured Dane Haylett-Petty, who went over to score. Grant converted to bring the deficit back to seven.

A well-worked lineout set-piece move straight from the training ground saw substitute Apisai go over for the Hurricanes' third try. Sam Lousi secured the lineout and the ball was switched blindside to Brad Shields which completely wrong-footed the Force defence and Apisai profited to crash over.

The Canes' bonus-point try came from Super Rugby's leading try-scorer Vince Aso. Beauden Barrett decided to run it from his own line and then went wide to Perenara who sent a kick through. Aso was on hand to brilliantly collect the grubber and race through to cap off a brilliant counter-attack. Haylett-Petty was yellow-carded for cynical play and this cost the Force dearly as they conceded two tries in his absence.

Once again the Hurricanes ran it from their own line. Perenara kicked deep and the Force collected but threw an errant pass which Perenara picked up and dotted down.

Laumape bagged his brace as the 'Canes scored their sixth. Nehe Milner-Skudder, his first game back from a prolonged lay-off, created a try with a beautiful side step before running thirty metres and sending Laumape away. 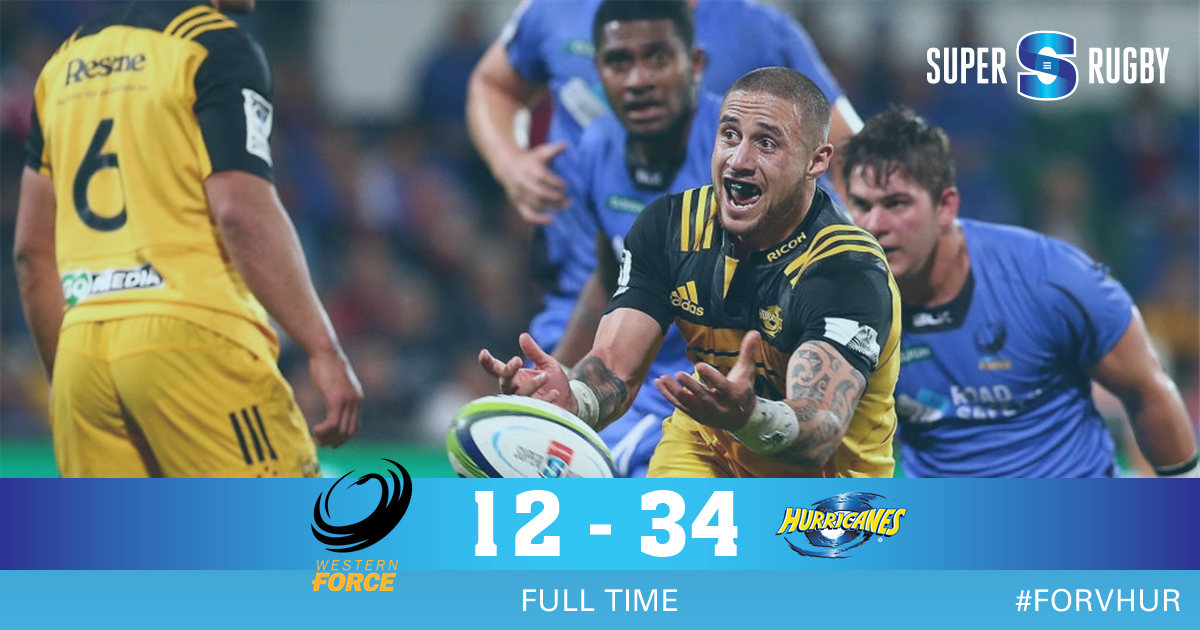