Hurricanes On Track for Scoring Record

The Lions threw the record books into disarray in 2016 when they put a total of 622 points on the board as their Super Rugby campaign saw them fall just one step short of ultimate victory, but already in 2017 the team that pipped them at the post has taken it upon themselves to demolish the point-scoring record set by the South African squad.

Cruising along at a formidable 48 points scored per game on average, the Hurricanes are well on track to sail past the current Super Rugby record of 622 points in a single season (including post-season) set by the Lions in 2016. Prior to last year, no team had scored more than 541 points in a single season, though the extended competition provided such an opportunity. 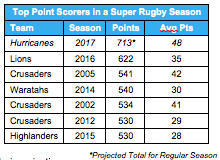 If the Hurricanes can continue on their projected course, they are forecast to score 713 points this regular season alone. Should they play in all three rounds of the play-offs, their projection rises to 855 points scored, more than 200 in excess of what the Lions were able to muster last season.

Even if we discount the 154 points scored by the Hurricanes in their opening two fixtures and work off their average since, the Wellington side are still in with a sniff of the record. Since the opening fortnight, the Hurricanes have averaged 33 points per game; if they are able to continue that average across the rest of their regular season, they’ll finish with a total of 580 points, which can be extended to 678 points should they make a clean run through the post-season.

It’s certainly been a team effort from the Wellington side, with their highest-ranked point-scorer coming in at 18th on the overall point-scoring list so far this season.

The Hurricanes have had five different players to score 25 points or more this season, with Ngani Laumape and Vince Aso leading the try scoring tally by two tries overall. The team have also boasted three proficient goal kickers, with Beauden Barrett (11 goals), Otere Black (11), and Jordie Barrett (9) all contributing heavily to the team’s large hauls.