The Chiefs continued with their fine recent form when they claimed a 53-10 victory over the Force in Hamilton on Saturday.

In a scintillating allround display, the Chiefs’ outscored their opponents nine tries to one with Charlie Ngatai leading the way after crossing for four five-pointers.

And the winning margin could have been even bigger if Damian McKenzie and Stephen Donald didn’t squander 11 and two points respectively from the kicking tee.

McKenzie made up for his underwhelming goalkicking display with superb attacking play and finished with a 16-point haul thanks to a brace of tries and three conversions.

The victory moves the two-time champions to the top of the Australasian group for the round and they currently have 19 points on the table from five matches played.

HIGHLIGHTS: Don't ask how, but we managed to cut the highlight package down to just a few minutes. Sit back, strap yourself in and re-live some #SuperRugby brilliance from the Chiefs!

The Force did most of the early attacking and matched the Chiefs’ high tempo style of play. The visitors launched several attacks inside their opponents’ half, setting up multiple phases but weren’t able to penetrate the Chiefs’ defence.

The Force’s inability to score duringvthat periodcame back to haunt them as the home side took the lead in the 12th minute with what can best be described as a miracle try. The build-up started just inside their 22, when Sam Cane won a crucial turnover at a breakdown, and the Chiefs launched a counter attack with Damian McKenzie and James Lowe prominent.

The duo traded passes, taking play up to the Force’s 22 metre line, before Brad Weber gathered a pass from Lowe close to the Force’s 10-metre line.  He then got a pass out to Aaron Cruden, who was tackled by Dane Haylett-Petty, inside the Forces’s 22, but the All Blacks pivot did brilliantly to free his arms and offloaded to McKenzie, who crossed for the opening try.

McKenzie’s conversion attempt was off target and the Force reduced the deficit to two points 10 minutes later, when Peter Grant slotted a penalty, and took the lead for the only time in the match when Ben Tapuai crossed for their only try in the 25th minute.

The Chiefs struck back when Michael Leitch powered his way over the whitewash, after showing great strength from the back of a five-metre scrum, which meant the hosts held a slender two-point lead at the interval.

The rest of the match turned in to a nightmare for the Force and they conceded 41 points in the second half as the home side stepped up several gears on attack.

The visitors’ cause wasn’t helped when Angus Cottrell was yellow carded for a tip-tackle on Sam McNicol in the 57th minute after Ngatai crossed for his first try 10minutes earlier.

The Chiefs made full use of their numerical advantage during this period and Toni Pulu, Ngatai and James Lowe sealed the result with further tries.

Pulu’s effort was the best of the lot and the replacement winger socred with his first touch of the ball after Cruden, McKenzie and Ngatai all handled in the build-up.

The Force were now well and truly beaten but the hosts didn’t take their foot off the pedal. First McKenzie weaved his way past several defenders, before crossing for his second try in the 73rd minute and Ngatai sealed a brilliant attacking display when he got over for his two other tries in the game’s closing stages. 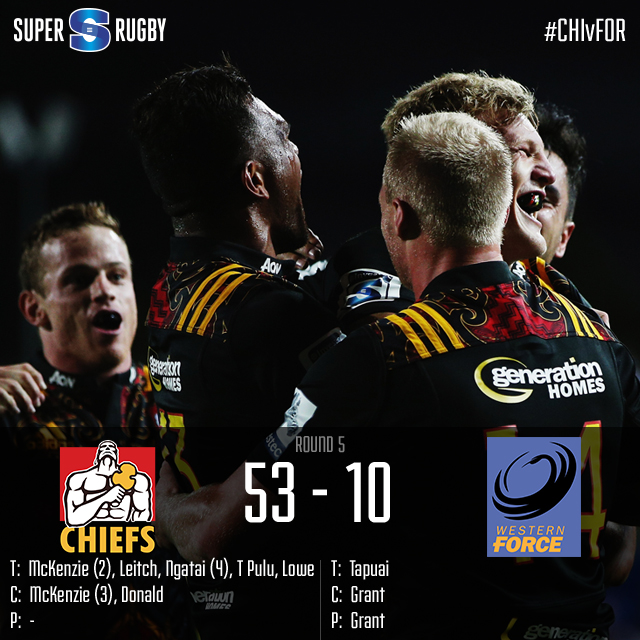