The Waratahs continued their march toward the Super Rugby knockout stages with a 33-17 victory over the Chiefs at Yarrow Stadium on Saturday.

'Tahs tries from Israel Folau, Dave Dennis and Bernard Foley in response to two from Bundee Aki ultimately proved the difference as the Australian side ended an eight-game drought in New Zealand to underline their credentials as title contenders.

By contrast, the Chiefs' title defence looks on very shaky ground as they end empty handed for the second consecutive week following the heavy loss to the Hurricanes last Saturday.

The Waratahs were well worth the four points having outscored their hosts three tries to two and impressing with the intensity of their defensive work.

The Tahs led 13-3 at the interval thanks to Folau's eleventh try of the season and couple of penalties from Foley, who went on to finish the game with a perfect record from the kicking tee.

Chiefs replacement back Aki touched down twice in the space of six minutes around the hour mark to put the home side ahead but Tahs skipper Dennis scored the game-winning try with eight minutes left before Foley's try in the last minute rubbed salt into the Chiefs' wounds.

Aaron Cruden and Foley exchanged early penalties but the 'Tahs were soon over the whitewash as Folau crossed in the corner after a great break and hand-off by Adam Ashley-Cooper, who offloaded to put his full-back away.

Foley added the conversion and a penalty on the half-hour mark to give the visitors a 10-point lead at the break.

PHOTO: Mount Taranaki rises up behind Yarrow Stadium on another stunning night in #NewPlymouth #SuperRugby pic.twitter.com/SpMIqAhN6A

The Chiefs were probably fortunate to still be in the game, which opened up in the second half.

A little help from the TMO saw the hosts get their first try as Aki flopped on the ball after chasing a Cruden chip, but the replays suggested he started his run from an offside position.

Cruden added the extras, but almost immediately from the restart Kurtley Beale landed a long-range penalty to leave the gap at six points.

Another grubber, this time from full-back Tom Marshall, saw Aki bag his second try with Cruden's conversion from out wide giving the Chiefs the lead for the first time since the 9th minute.

Foley added another easy three-pointer though to put the 'Tahs back in front before Dennis handed off Pauliasi Manu to break clear and race home.

Foley added the touchline conversion to leave the Chiefs trailing at 26-17.

The 'Tahs held onto possession in the closing minutes and made sure the Chiefs would not get a losing bonus point when Foley's momentum took him over the line after a good pass from Beale. 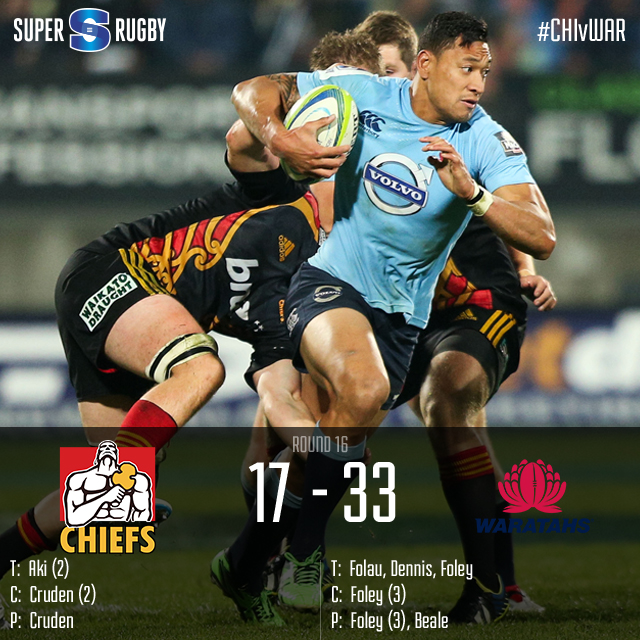