The Jaguares outscored the Sunwolves by seven tries to five to clinch an entertaining 46-39 win in Buenos Aires.

It was the visitors who went into half-time ahead thanks to tries from Will Tupou, Shota Emi and Yu Tamura and the boot of the fly-half, with the Jaguares down by just three at 25-22 after scores from Leonardo Senatore, Shota Emi and a penalty try.

Agustín Creevy's try off the back of a rolling maul gave the Jaguares the lead for the first time, but the Sunwolves showed great character, hitting back with tries from Tamura and Sam Wykes to open up a 39-27 lead.

Matías Alemanno's try, the Jaguares' fifth, set up a tense finish with the hosts within touching distance of the lead before Creevy crashed over off the maul.

It was left to Matias Moroni, with his first try of the year, to then clinch a highly entertaining victory with five minutes to go, ending a four-game losing streak in the process.

It was far from perfect, but Jaguares head coach Raúl Pérez will have been glad to welcome back Argentina scrum-half Martín Landajo from injury.

The Sunwolves shot out of the blocks, no doubt buoyed by their impressive performance in defeat against the Chiefs the previous weekend, as Tupou carved his way through the hosts' defence with ease to open up a 7-0 lead.

Senatore was soon over to level things up, leaping over a ruck to finish, only for the Sunwolves once again to undo the Jaguares defence after finding space out wide.

Willie Britz supplied the final pass to the rapid Emi, who went over untouched for the visitors' second score of the match. Tamura couldn't convert, but the Sunwolves led 15-10.

Once again the Jaguares had a nearly instant answer, Boffelli doing well to finish in the corner, but with Juan Martín Hernández missing the resulting conversion the score were tied.

Sharp work at the restart and over the ball at the breakdown was helping the Sunwolves territorially as the Jaguares looked short of answers, a third Tamura penalty restoring their lead.

Small handling errors were also continuing to undo the Jaguares' best efforts in attack, with Boffelli always dangerous out wide. One of those errors then proved to be calamitous, as Hernández dropped a straightforward pass with the bounce coming up perfectly for Tamura who raced away to score.

Good pressure from the Jaguares led to successive five-metre lineouts after the half-time hooter, and once the Sunwolves twice stopped the maul illegally referee Jaco van Heerden awarded a penalty try, also opting to sin-bin Wykes. That timely score meant the Sunwolves led 25-22 at the break.

Somehow given their personnel advantage and great field position the Jaguares failed to score after the restart, Tomás Lezana watching the ball be ripped from his hands by Britz with the line beckoning, before eventually Creevy crashed over from the back of a rolling maul.

But back to a full compliment the Sunwolves instantly replied, Tamura getting his second try after more good build-up play from Britz before the fly-half ran an ideal support line on the inside to sprint clear. With that try the Sunwolves led 32-27.

Wykes was soon in on the action as the Jaguares' defence continued to be exposed, with multiple errors from Hernández frustrating the home supporters.

Starting to become wary of the clock the Jaguares needed a response, and they got one from Alemanno when the big lock powered his way over near the posts, Hernández converting to put the Jaguares within a converted try.

And with the Sunwolves beginning to tire and the Jaguares' big ball carriers building confidence, suddenly all the momentum was with the home side down 34-39 inside the final ten minutes.

There was no stopping the rolling maul, Argentina captain Creevy getting his second try to level the scores at 39-39 before the conversion was shanked wide by Joaquín Díaz Bonilla.

It didn't matter; the Jaguares attack sparking into life again after the bounce of the grubber kick went right for the home side, culminating in Moroni scoring by the posts for the go-ahead try.

Díaz Bonilla made no mistake this time off the tee with the conversion, taking the score to 46-39, but the drama wasn't over after Lezana's knock-on handed the Sunwolves an attacking scrum.

However despite confusion over the final whistle coming before the hooter sounded, the Jaguares clung on to get revenge for their defeat last year in Tokyo. 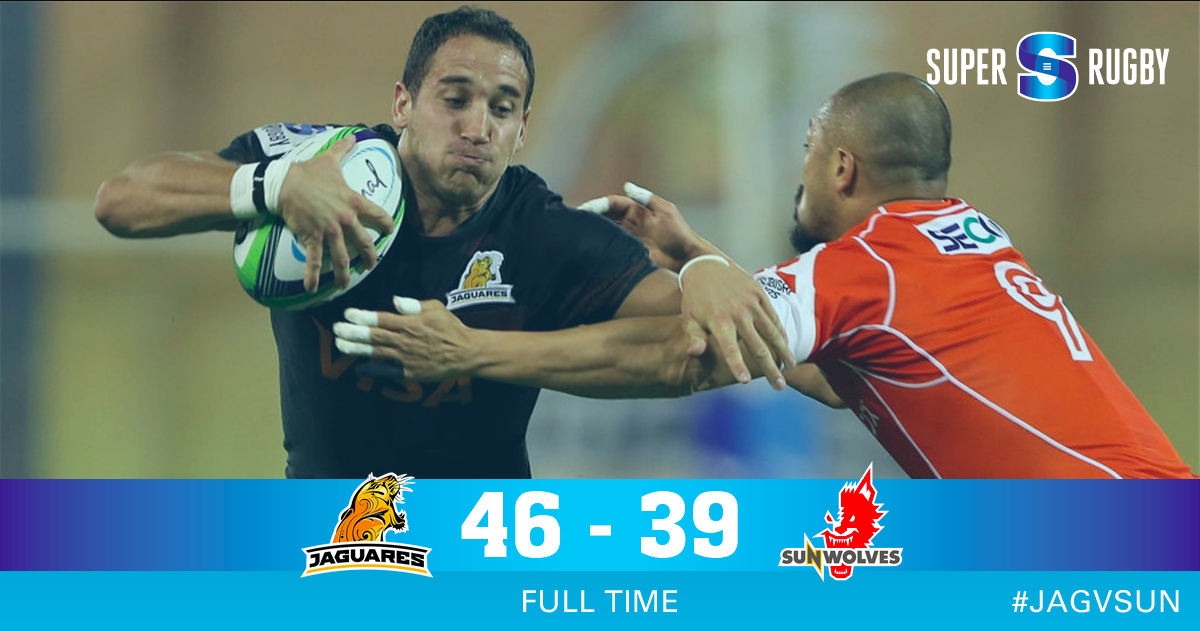