Jaguares get the better of Waratahs

The Jaguares returned to the victory trail when they claimed a deserved 40-27 triumph over the Waratahs in Sydney on Saturday.

In an entertaining match, played at a frenetic pace, the Jaguares were full value for their win as they outscored their hosts by five tries to three and their fly-half Nicolás Sánchez finished with a 15-point haul courtesy of three penalties and three conversions.

The men from Buenos Aires' discipline let them down, however, when their locks Guido Petti and Benjamin Macome were both yellow carded in quick succession late in the first half although the Waratahs also had a player sent to the sin bin when Ned Hanigan received his marching orders before that.

The visitors made a terrific start and after Sánchez gave them the lead via a penalty, they took control of proceedings thanks to two tries inside the opening quarter.

First, Pablo Matera burst through a couple of challenges in the sixth minute to cross the whitewash after Leonardo Senatore did well in the buils-up and five minutes later, Matías Orlando capitalised on a defensive error from the Waratahs and raced away before scoring his side's second try.

Bernard Foley reduced the deficit from the kicking tee midway through the half but Sánchez restored parity with a penalty of his own in the 26th minute.

Things went from bad to worse for the home side when Hanigan was yellow carded in on the half-hour mark for a backhanded fist to the throat of Matera and the Jaguares made their numerical advantage count when Macome rounded off a flowing move in the 33rd minute.

Sánchez converted but the Waratahs struck back in style when Israel Folau gathered a crossfield kick from Foley and beat a couple of defenders before dotting down.

Thst boosted the home side's confidence and they were handed a lifeline when Petti Petti was sent to the sin bin for collapsing a maul and the visitors were dealt another blow when Macome joined his lock partner on the sidelines for slowing the ball down cynically at a ruck inside his 22.

The Jaguares did well to keep the Waratahs out with the score 25-10 in their favour at half-time but three minutes into the second half, Foley glided through a hole in the visitors' defence to score his side's second try.

And three minutes later, Foley got over for his second try before adding the extras which meant the Jaguares held a slender 25-24 lead. But despite that fightback from the Waratahs, the Jaguares did not panic and they extended their lead in the 55th minute when their captain Agustin Creevy crossed from close quarters for their third try.

Sánchez converted before Foley narrowed the gap with his third penalty but another three-pointer of the tee from the Jaguares pivot in the 62nd minute gave his side some breathing space.

The Waratahs were chasing the game now but, in doing that, they left gaps in defence and the Jaguares secured victory in the 67th minute when Matías Moroni gathered his own kick ahead before crossing the whitewash. 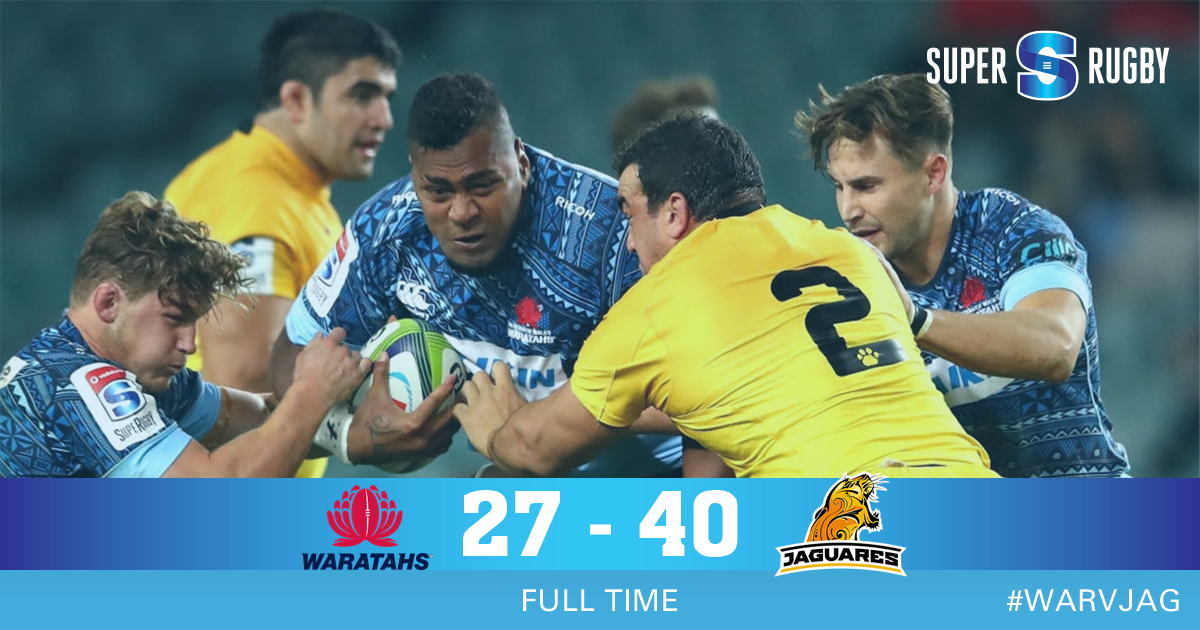