The Lions nudged past the Cheetahs 28-25 in Bloemfontein on Saturday thanks to a double from Rohan Janse van Rensburg.

It was a classic first game of Super Rugby as both sides were clearly still shaking off the off-season cobwebs. Lions centre Janse van Rensburg ultimately scored two tries to save his side from a loss in their first game of the season.

The win means the Lions top the Africa 2 Conference after the Sharks only picked one point on Friday against the Reds, which stands them in good stead. The Cheetahs meanwhile picked up a losing bonus point for coming within three points.

It was quite a telling game as the Lions’ players, who used the off-season to play in Japan, looked sluggish and not at their exuberant best, while youngsters like Fred Zeilinga and Tshego Nche, when he came of the bench, were excellent for the Cheetahs, with Zeilinga being awarded Man of the Match despite being in the losing side.

The Lions drew first blood when they were given a penalty in the Cheetahs’ 22 after a slow start to the game and the penalty looked as though it might have risen the Lions’ intensity.

But it was the Cheetahs that kicked into gear first. The home side blitzed the Lions and made it all the way to their try-line after a blistering run from Uzair Cassiem. It looked as though the Cheetahs were bound to score before Ruan Ackermann pilfered the ball at the ruck with expert precision.

The hosts’ pressure finally paid off though when the Cheetahs turned the Lions at the scrum and Zeilinga added the three points levelling the score at the 20-minute mark.

After another penalty given at ruck time from the Cheetahs the Lions kicked for touch and played the ball down the line quickly, but the Cheetahs defence remained strong. They didn’t leave the half pointless though, as Jantjies slotted another three points after the Cheetahs were penalised at ruck time once again.

The Lions’ cause took a major casualty when Springbok scrum-half Faf de Klerk was shown a yellow card for going off his feet at a ruck and Zeilinga finally found some kicking form, slotting his second penalty and leveling the score.

The half-time score was 6-6 after a bland first half riddled with handling errors and penalties.

The second however got off to a more interesting start. The Lions were deep in their own half and looked like they would start a strong counter-attack after some barnstorming runs from their forwards.

But a pass to the wing went awry and Cheetahs flyer Raymond Rhule picked up the ball and raced down the wing to score, with Zeilinga converting making the score 13-6 at the 43-minute mark.

Two minutes later Zeilinga slotted a long-range penalty to compound their lead over their Northern rivals.

The Lions finally got a try of their own as the Pride of Jozi launched an exciting run from their own half that saw Lionel Mapoe pick up a loose pass and control it well before popping to Lions full-back Andries Coetzee, who ran down field and sucked in two defenders before giving it wide to Janse van Rensburg for his first try. Jantjies added the extras.

Zeilinga extended his side’s lead when Lions prop Martin Dreyer was caught offside but the Lions hit back quickly when Jantjies added another penalty to his points tally making it a three-point game with 20 minutes to play. The Cheetahs number ten then added another three points to his side’s score. 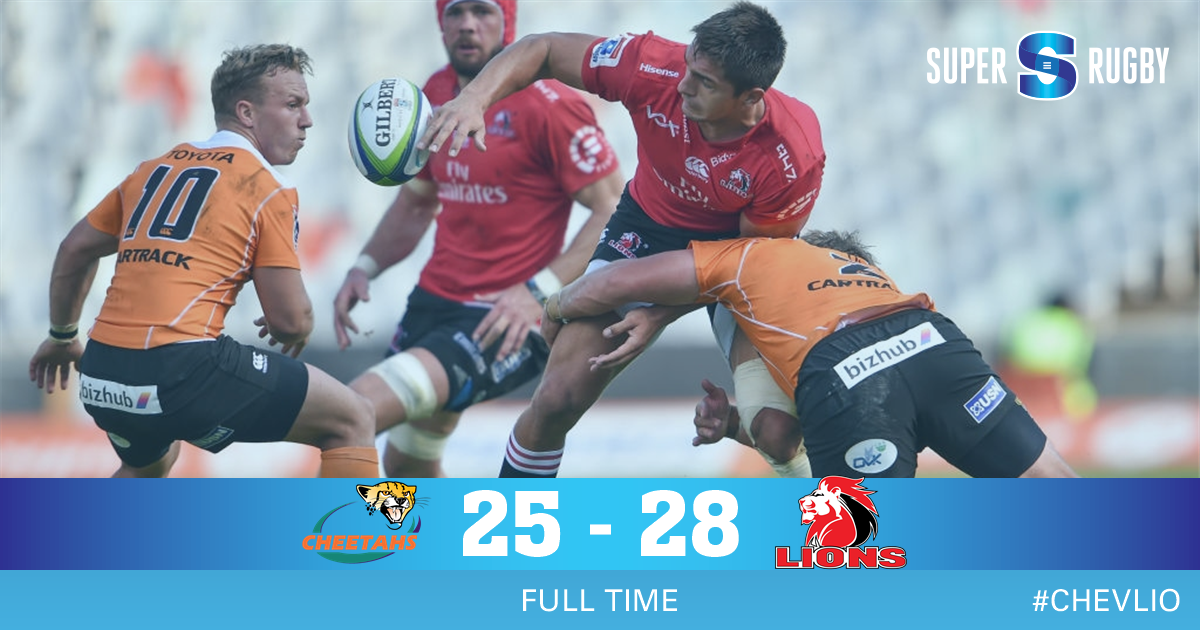 The Lions then went into the lead when they were given a penalty on the Cheetahs five-metre line and mauled it forward.

And last season’s finalists were then awarded a penalty try inches from the try line after Francois Uys was deemed to be interfering at the maul illegally by the referee, and in turn was given a yellow card.

It looked as though the Lions had the game in the bag with a Cheetahs a man down but after the Lions were blown up for a penalty in a maul the Cheetahs number ten slotted three points and they went ahead again.

The Lions responded perfectly though as after some confusion at a ruck in the Cheetahs half, Janse van Rensburg was given the ball in space and ran the ball in to score his second try, winning the game for the Johannesburg side.