The Kings picked up their first victory of the Super Rugby season as they saw off a spirited Sunwolves side, winning 33-28 on Saturday.

Victory takes the Nelson Mandela Bay Stadium outfit off the bottom of the overall standings and just three points behind the Jaguares while the Sunwolves replace them as the basement franchise, despite a gallant effort.

It was a frantic opening half in Port Elizabeth as the Kings went into the break leading 23-20 after the fans were treated to six tries.

Steven Sykes, Malcolm Jaer and Shane Gates crossed for the hosts, while Shota Horie, Tusi Pisi and Tim Bond responded for the Sunwolves.

After the break the tempo and excitement dropped substantially however as only Louis Fouche and Pisi's penalties troubled the scoreboard, that was until two minutes from time when Elgar Watts and Akihito Yamada scored for their respective outfit as the Kings came out on top.

HIGHLIGHTS: The Kings picked up their first victory of the #SuperRugby season as they saw off a spirited Sunwolves side, winning 33-28 in Port Elizabeth.

The Kings struck first in the game when after full-back Tim Visser had been denied a try after putting a foot in touch, Sykes reached out from close-range to open the account. Fouche made no mistake with the simple extras as the Kings had themselves a seven-point advantage.

Fouche made it 10-0 on eight minutes after Bond was offside, but Pisi responded when Stefan Willemse was penalised for not rolling away.

It was then back to the try scoring in Port Elizabeth as first Gates set up Jaer with a lovely inside ball and then Horie hit back with a simple crossing five metres out. Two minutes later Pisi backed himself for the try-line and suddenly the game was locked up at 15 apiece.

The Kings seemed to be going into the break with a cushion when after a Fouche penalty, Gates broke down the right wing to make it 23-15. But, once again the Sunwolves wouldn't be outdone as Bond went over before half-time. A missed conversion meant the Kings now led 23-20.

As mentioned it was a disappointing second stanza and only Pisi and Fouche troubled the scorers off the tee, as both sides hunted the win.

It took until the 78th minute before the game's next try and it came from replacement Watts, with Fouche's extras making it 33-23 before the Sunwolves launched a late surge through Yamada's breakout try down the left. It was though too little too late as the Kings held on. 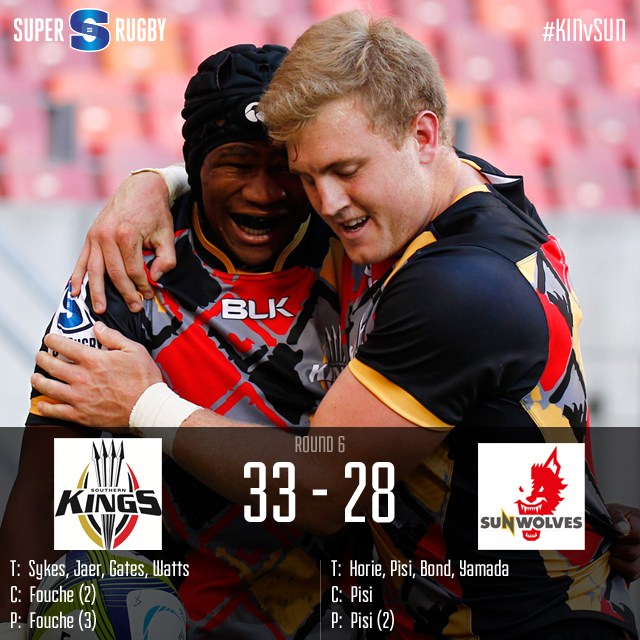