The Kings secured a massively significant 26-17 come-from-behind victory over the Waratahs in Sydney on Friday.

After the Waratahs had surged into a 12-0 lead within 25 minutes through tries from Taqele Naiyaravoro and Rob Horne, the Kings looked as if they were facing an uphill battle.

But a terrific second-half response, where the boys from the Eastern Cape of South Africa showed their character, ensured they got in front and stayed in front showing good defence in the face of a late Waratahs onslaught.

The win is so much more significant for Deon Davids' men seeing as it comes away from home and is only their second win of the competition.

The Waratahs scored first courtesy of a well-directed cross-field kick from the boot of Bernard Foley. Israel Folau won the contest in the air and Taqele Naiyaravoro profited from the loose ball to dot down in the 12th minute to put the home side 5-0 into the lead. Foley missed his conversion

Lionel Cronje missed a penalty much to the disappointment of the Southern Kings after they exerted some good pressure on the hosts.

The Waratahs were clearly dominating all of the set-pieces and there were times when they were on the visitors' try-line where
they should have turned their pressure in to points. This is not to discredit some good turnover wins from the Kings.

Rob Horne scored his side's second after a move which started on their own try-line. Folau beat numerous players in a mazy run and ran three-quarters of the length of the field before he pulled off a beautiful flick-pass to Foley who did well in support, offloading to Rob Horne, who evaded the attempted tackle of Wandile Mjekevu to dot down in the 23rd minute.

Mjekevu actually caught up with Horne and will be disappointed he failed to make the tackle at the crucial time. This time, Foley converted successfully as his side took a 12-0 lead.

A good rolling maul got the Kings close after a penalty got them a lineout ten metres out. They then took the ball through six phases before a penalty was awarded for a a breakdown infringement by the 'Tahs. Ned Hanigan was sin-binned in the 32nd minute as referee Rohan Hoffman had warned skipper Michael Hooper before about his side's repeated infringements.

Chris Cloete was then yellow-carded for his dangerous tackle on Tahs' captain  Hooper.

Despite having a player less, the home side scored a try out of nothing and completely against the run of play. With the Kings camped on the Tahs' try-line, Foley intercepted and fed Cam Clark who ran the full length of the field to dot down and make it 17-0. Foley missed the conversion.

The Kings finally got their well-deserved try, when after the re-start, the Kings charged down an attempted Tahs' clearance. The visitors recovered the ball and from the resulting ruck, prop Justin Forwood crashed over in the 36th minute. Lionel Cronje added the extras as the Kings went into the interval 17-7 down.

After the resumption of the second half, the Kings applied persistent pressure on the home side.

They won a lineout on the Tahs' 5-metre line and capitalised on their dominance when the ball was spread wide all the way to the left-wing where Masixole Banda was on hand to score his second try in successive weeks in the 45th minute. Cronje failed to convert, leaving the score at 17-12.

The Kings then went down to fourteen men in the 52nd minute when flanker Chris Cloete was yellow-carded for a dangerous high tackle.

Another impressive rolling maul from The Kings meant Michael Willemse bundled over. Cronje converted to put the away side 19-17 in the lead.

The Kings were then awarded a penalty try before Naiyaravoro's converted second try gave Davids' men a late scare.

But a historic victory for the newest South African franchise was not to be denied as they came away 26-24 victors. 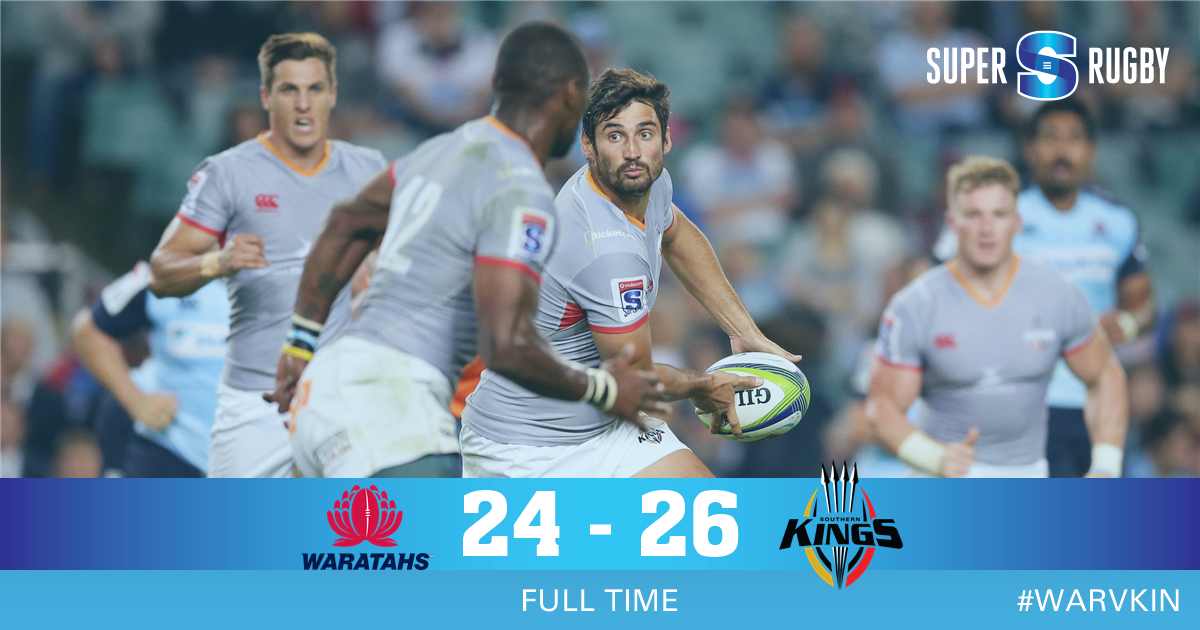