The Kings won a confrontational South African derby 35-32 against the Sharks at Nelson Mandela Bay Stadium. It is first time the Kings have beaten a fellow South African team.

It was a pulsating end to end encounter that went right down to the wire and saw plenty of off-the-ball scuffles.

A last-gasp try from substitute Pieter-Steyn De Wet was the perfect ending to a blockbuster Super Rugby clash and the script could not have been written any better.

The Kings certainly made a statement here as they went into the match as underdogs but ended up coming out on top against more fancied opponents.

The Sharks, meanwhile, will be disappointed to come away with no points and coach Robert du Preez will no doubt be livid to lose to their rivals.

The Kings started the brighter of the two sides, taking the game to their more fancied opponents. After Coenie Oosthuizen was found guilty of straying offside, Lionel Cronje slotted the penalty to give the home side an early 3-0 lead.

In the fifth minute, the Kings extended their lead with a try. From their lineout, Cronje’s pinpoint cross-field kick found Alshaun Bock, who was brought in as a late replacement for Wandile Mjekevu at number 14.

The Sharks narrowed the deficit to five when Patrick Lambie kicked a penalty from straight in front of the poles.

The Sharks began to dominate the possession and territorial stakes getting themselves more and more into the game. Lambie reduced the deficit to just two when he kicked his second penalty.

The Sharks won a penalty five metres out from the Kings’ try-line. But instead of taking the three points like they usually do, they put the ball into touch for a five-metre lineout. From the lineout the Kings did well to stop the maul. However, they allowed Daniel du Preez to stretch over from the resulting ruck. It was too easy in fairness. Lambie converted to give the Sharks a 13-8 lead after 25 minutes.

Cronje made it a two point game when he executed a wonderful drop goal from just inside the Sharks’ half.

Garth April, on as a substitute for Lambie who was substituted for a suspected concussion after being involved in a collision with his own teammate Rhyno Smith, then kicked a long-distance penalty to extend the Sharks lead to 16-11.

But then the Kings took the lead just before the interval with a great team try. Bock made the break and offloaded for Cronje, who scored under the posts. Rhyno Smith was yellow-carded for a high tackle as he attempted to stop Cronje. The sides went into the break at 18-16 to the Kings.

The Kings started the second half with a bang. After just 30 seconds after the break, Louis Schreuder made an excellent line break and set Bock on his way who showed real pace and determination to get to the try-line first. Cronje added the extras to make it 25-16. 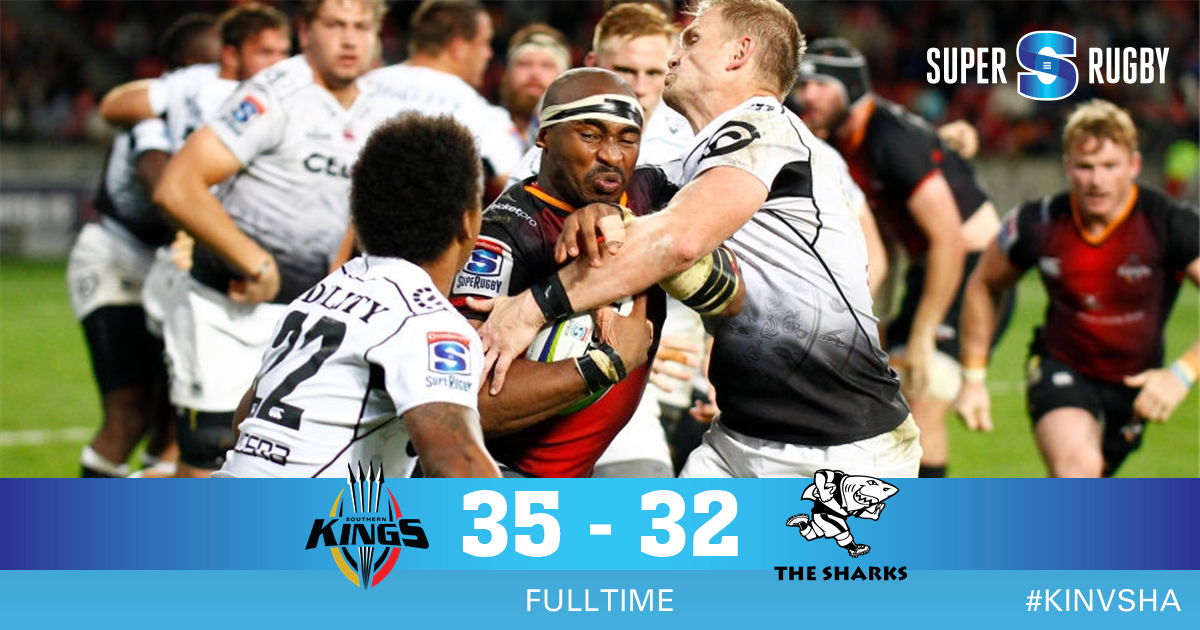 Kings’ prop Ross Geldenhuys was then yellow-carded for repeated infringements at the breakdown area. April kicked three points from the resulting penalty to narrow the deficit to six.

The Sharks then took the lead. After pushing the Kings off their own scrum, they launched a successful counter-attack passing the ball through the hands out on to the right wing where Lwazi Mvovo showed his finishing skills cutting inside to bash over. April made a good conversion from out on the touchline to give his side a one point lead making the score 26-25 after 60 minutes.

The sides then traded penalties as the Sharks retained their one point lead. April then extended the lead to four with a penalty to make the score 32-28.

But the Kings had the last laugh. From a five-metre lineout they took the ball through numerous phases. De Wet provided the extra man on the outside and dotted down as the Kings exposed the Sharks out wide. Cronje added the extras to make it 35-32 and that’s how this thrilling encounter ended.