A late penalty from Patrick Lambie helped the Sharks overcome the Jaguares 25-22 in their Super Rugby meeting in Buenos Aires on Saturday.

It had looked as though the game was heading for a draw but with one minute remaining, referee Marius van der Westhuizen blew for a scrum offence and Lambie made no mistake for a win that keeps them in touch with the Lions.

They are now two points behind the Johannesburg side after the Lions, who have a game in hand, clamied a bonus-point win over the Blues. Meanwhile the Jaguares are now 19 points off the pace in Africa 2 after another defeat.

It was an eventful opening half at Velez Sarsfield and despite the hosts scoring two tries to one, the boot of Lambie helped the Sharks into the break with a 19-17 lead. However, they were without one of their big ball carriers as back-row Jean Deysel had been stretchered off.

Jaguares opened the scoring in the eighth minute when after a solid break from full-back Joaquín Tuculet, he then found Tomás Lavanini on his side and he showed decent pace to run in. Nicolás Sánchez slotted the extras, making Lambie's earlier penalty miss hurt that bit more.

Lambie did find his range soon after and kicked two penalties to cut the gap to one point on his first start since returning from injury.

However, the Jaguares rallied and were controversially awarded a try through Martín Landajo on 19 minutes when it looked like the scrum-half had not made the line with his reach-out. Van der Westhuizen, fortunately for the hosts, disagreed with his TMO and the score stood.

At 6-14 the Jaguares were looking solid but back came the Sharks via the boot of Lambie, who picked off the growing number of offences in Buenos Aires. In fact, flank Pablo Matera was punished for his team's ill-discipline and saw yellow, this after Deysel departed the action.

The Sharks made their extra man count as Dan du Preez crossed but with Sánchez's late penalty, it was a two-point ball game at the break.

It was apparent the match was going to go down to the wire so when Sánchez missed a 40-metre penalty, Jaguares fans would have been forgiven for being concerned, even more so when a poor box kick from Landajo led to his pack not retreating the ten. Lambie made them pay.

Missed chances were becoming a worry for the hosts and none more so when a series of scrums five metres from the Sharks line didn't result in points. There was still no need to panic though as they had the territory and 15 minutes to find the converted try to win the match.

They continued to bang on the door and finally the try came when loosehead prop Santiago García Botta barged over. However with regular goal-kicker Sánchez substituted, Hernández was unsuccessful with the conversion so the game was tied at 22-22 with seven minutes left.

Then up stepped Lambie for his sixth penalty of the night as he capitalised on a scrum offence to boot his team to a hard-fought victory. 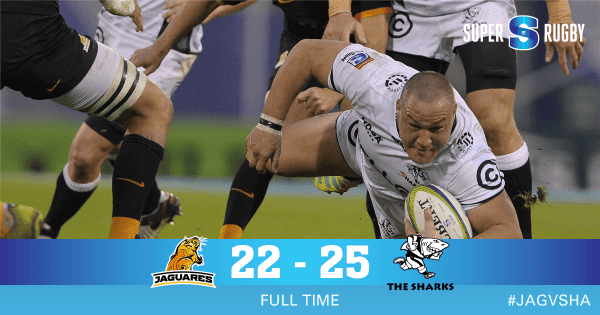