The Lions kept their Super Rugby Finals Series hopes alive with a comprehensive 40-17 triumph over the Cheetahs at Free State Stadium.

The result keeps the Lions firmly in the hunt with the Stormers failing to collect a four-try bonus point and the Bulls falling to the Chiefs in Rotorua on Friday.

The Lions outscored their hosts four tries to two to claim a well-deserved victory having led 23-3 at the interval.

If anything, the scoreline somewhat flatters the Cheetahs who were completely outplayed for an hour and, in similar fashion to last week's hammering at the hands of the Highlanders, needed a couple of late tries to save their blushes.

All credit to the Lions though, as their work-rate and desire to use the width of the field impressed once again with scrum-half Faf de Klerk the standout performer.

Despite both teams going hell for leather in the opening exchanges, it took almost half an hour for the first try to be scored as opposing flyhalves Elton Jantjies and Francois Brummer swapped penalties to leave the Lions 6-3 up.

The Cheetahs couldn't match the Lions intensity at the gainline however and it was just a matter of time before the tries started flowing.

Flank Jaco Kriel was first to cross the whitewash off the back of a Lions maul. Lionel Mapoe scored the second try, after the half-time hooter, following great work from De Klerk who slipped through gap in midfield.

Jantjies added both conversions and a penalty give his team a comfortable lead at the break.

The Lions struck again soon after the restart as wing Courtnall Skosan crossed after Howard Mnisi and Jaco Kriel combined on the counter attack.

The Cheetahs replied with try from a maul of their own as Boom Prinsloo crossed but De Klerk added the bonus-point try for the Lions from short range just after the hour mark following a break by Mapoe.

Again Jantjies was on target with both conversions and the result was all but settled at 40-10.

A late consolation try, again from a maul and again from Prinsloo, was too little, too late for the Cheetahs. 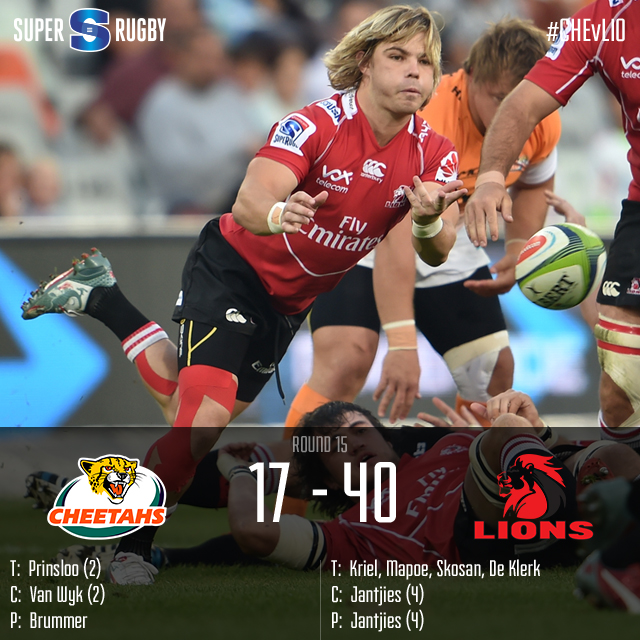