The Lions were made to work hard before securing a 24-21 victory over a spirited Jaguares side in Johannesburg on Friday.

In a tightly contested affair, momentum between the two sides ebbed and flowed throughout but it was the Lions who got the rub of the green in the end when Elton Jantjies slotted a late penalty which secured their victory.

Both sides scored three tries apiece although the Jaguares will be kicking themselves as they were the dominant side for large periods, but the Lions' experience pulled them through in the end.

The result consolidates the Lions' position at the top of the Africa 2 Conference table while the Jaguares are 12 points behind them in third place.

The visitors made a fine start and opened the scoring in the fourth minute when Matías Orlando rounded off a flowing move after Nicolás Sánchez made the initial break, just outside the Lions' 22, in the build-up.

The Lions did not take long to respond though and five minutes later, Harold Vorster ran a superb angle to gather a Ross Cronjé pass and stepped past a couple of defenders before crossing the whitewash.

The home side thought they had extended their lead shortly afterwards when Warren Whiteley went over in the right-hand corner but his effort was disallowed when television replays showed he put a foot in touch in the build-up.

The Lions put that setback behind them, however, as soon afterwards Lionel Mapoe put them in front in spectacular fashion. The Springbok ran onto a pass from Cronjé close to the Jaguares' ten-metre line and beat three defenders before selling Ramiro Moyano a brilliant dummy and dotted down under the posts.

Despite that setback, the Jaguares did not panic and with the score at 14-7 to the Lions at half-time the men from Buenos Aires were still in the game.

Just like the first half, they started the second period brightly and seven minutes after the restart Rodrigo Baez showed great determination to burst through a couple of tackles before stretching over the whitewash.

Sánchez added the extras to draw the visitors level and shortly afterwards Guido Petti put his side back in front when he went over in the left-hand corner after several players handled the ball in the build-up.

Things went from bad to worse for the hosts three minutes later when Vorster was sent to the sin bin after he slowed the ball down cynically at a breakdown just outside his 22.

Shortly afterwards, Lions coach Johan Ackermann replaced his entire front row as well as Andries Ferreira and Madosh Tambwe at the same time in a bid to take control of proceedings.

In the 69th minute, replacement wing Sylvian Mahuza went over in try-line after a mazy run but, like Whiteley, he too stepped into touch before crossing the whitewash.

But despite that setback, the Lions did not panic and they were rewarded five minutes later when Ruan Ackermann scored their third try after Andries Coetzee launched a counter-attack from deep inside his half.

Jantjies slotted the conversion which drew his side level and landed the matchwinning penalty in the 77th minute after the Jaguares were penalised for illegal scrummaging. 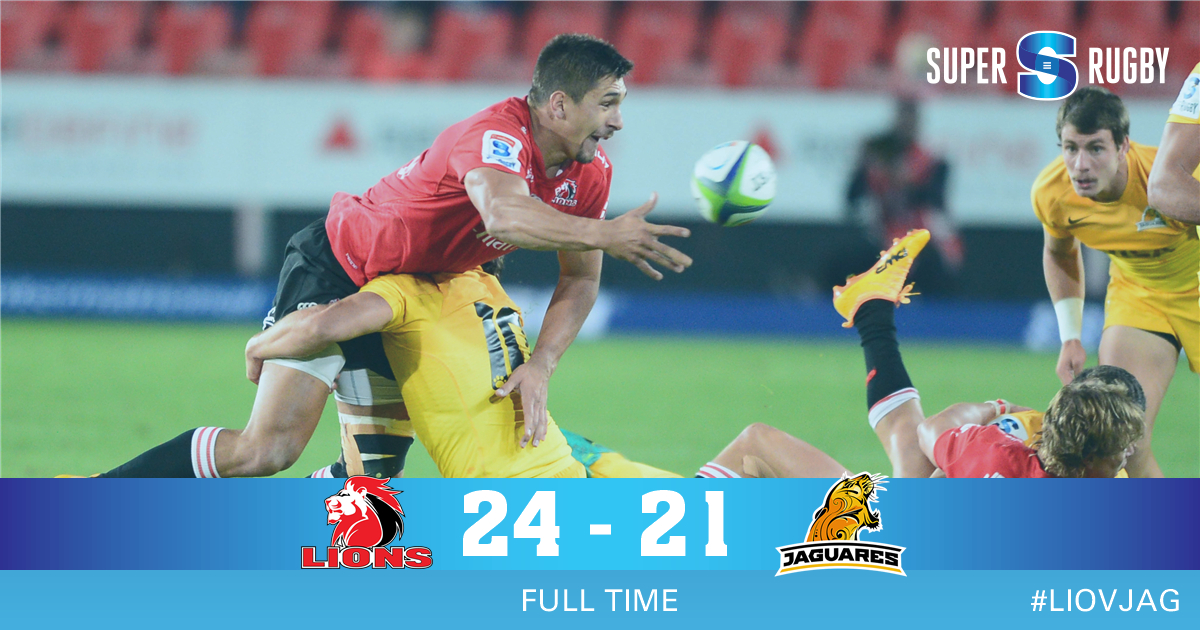