The Lions picked up their sixth victory of the Super Rugby season on Saturday as they saw off the Cheetahs 34-29 in a thrilling clash at Emirates Airlines Park.

Four tries apiece were scored in a wonderful display of attacking rugby. However, both teams' defensive coaches will not be happy in the review.

The Lions though will be delighted with the result as it is their fifth successive victory in the competition, as they continue to impress in 2015.

They came out firing on their home turf as a break from centre Harold Vorster got them into the opposition red zone. And from recycled ball they were over through flanker Warwick Tecklenburg with just two minutes on the clock. Elton Jantjies' simple extras meant it was 7-0.

Johan Ackermann's men continued to impress thereafter but could not add to their tally, with the Cheetahs the next to cross on 23 minutes. That score came from turnover ball from which Springbok wing Cornal Hendricks showed a good step and pace to race over from long distance.

At 7-7 things were nicely poised in Johannesburg heading into the break before an intelligent decision from veteran fullback Joe Pietersen saw him sit back in the pocket and land a drop-goal on 37 minutes. He almost doubled up before the hooter but his second attempt went wide.

The second-half began in similar style to the first for the Lions when wing Ruan Combrinck showed good pace to canter over after 41 minutes.

Jantjies' successful conversion meant it was now 14-10 to the Lions and that would soon become 21-10 when outside centre Lionel Mapoe scored a long-range effort, as the Cheetahs were seemingly still in their dressing room. Naka Drotske swiftly looked to his replacements off the bench.

The Lions possibly should have taken three points soon after off the tee but instead looked for the bonus-point try. That backfired and how, with the Cheetahs finding their form soon after as they levelled matters at 24 apiece by the 64-minute mark thanks to two quick-fire tries.

Francois Venter scored first when he reached out from close-range and when Pietersen set up Johann Sadie, suddenly the Cheetahs were level.

But fortunately for the home faithful their team regrouped and launched a barrage of their own, with Janjties' penalty followed up by a try from scrum-half Faf de Klerk to seal the victory with a bonus-point.

A late score from Cheetahs replacement flanker Carel Greeff meant the visitors at least left Ellis Park with two points after crossing for four tries to go with a defeat by less than seven points. They may feel however that the game was there for the taking on Saturday. 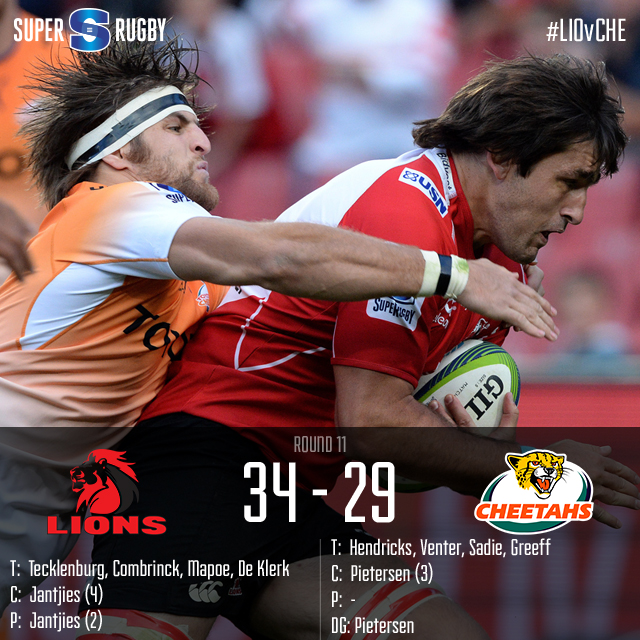