Losing streaks are not often relieved in the manner the Hurricanes achieved when beating the Cheetahs 60-27 in a Super Rugby try fest on Saturday.

Having gone without a win in eight games since May 11 last year, the Hurricanes were due, and they responded to captain Conrad Smith's 100th game with an nine-try breakout which saw flyhalf Beauden Barrett score two tries in a 23-point haul.

It was Barrett who eased open the lid of the fireworks box in the fifth minute to begin the scoring explosion. He took a kick ahead from wing Raymond Rhule at point blank range just inside his 22m area and marked the ball.

A quick tap followed and he hoofed the ball downfield into the opposite 22m area and set off after it. His opposite number Johan Goosen fielded the ball, but took Barrett on, only to be caught. The ball was cleared by Smith and was moved to the right.

After two rucks the ball was shifted to the short side where quick hands through wings Julian Savea and Alapati Leiua got the ball to sideline lurker hooker Dane Coles who scored.

Two minutes later the Cheetahs demonstrated their own intent when fullback Willie le Roux joined the backline and through a miss out pass to centre Johann Sadie. He then returned the ball inside to le Roux who raced under the posts.

While the Cheetahs got out to a 13-7 lead courtesy of penalty goals from Goosen, the brilliance of Barrett in the 18th minute made up for a missed Hurricanes try moments earlier following a blindside break by Chris Smylie which created a chance only for Julian Savea to lose the ball in the tackle.

But an attempted clearance from the Cheetahs was brought back downfield by the home side and Barrett, dropped the ball onto his left foot to get through the defence. He raced onto the ball to claim the bounce and beat le Roux to race away for the try.

Le Roux showed his own attacking skills in the 26th minute to provide an opening which No.8 Johann van der Walt raced through, and courtesy of some abysmal Hurricanes tackling, turned it into a try.

The helter-skelter continued when a superb inpass from Leiua was picked up by Smylie who crossed for the try, then just before half-time a backline foray by Julian Savea carried play deep into the Cheetahs half. The ball was moved to the short side and quick hands allowed Smith to feed fullback James Marshall down the sideline for the bonus point try.

In the next Hurricanes incursion into the line, Barrett broke through with ease to score. Some inter-play between the Savea brothers followed after Julian kept the ball in play, flicked a pass to his brother, who then returned it. Julian hared down field and in a linking movement it was Smylie who took the ball to the line and in the resulting ruck the ball came to lock Jeremy Thrush who drove over.

The Cheetahs came back with a driving lineout maul producing a try for lock Francois Uys.

But any hopes of a late Cheetahs comeback were extinguished when replacement wing Matt Proctor crossed in the 60th minute while the coup de grace was delivered by Smith who scored the penultimate try with Alapati Leiua taking advantage of the 20th turnover by the Cheetahs scoring the last. 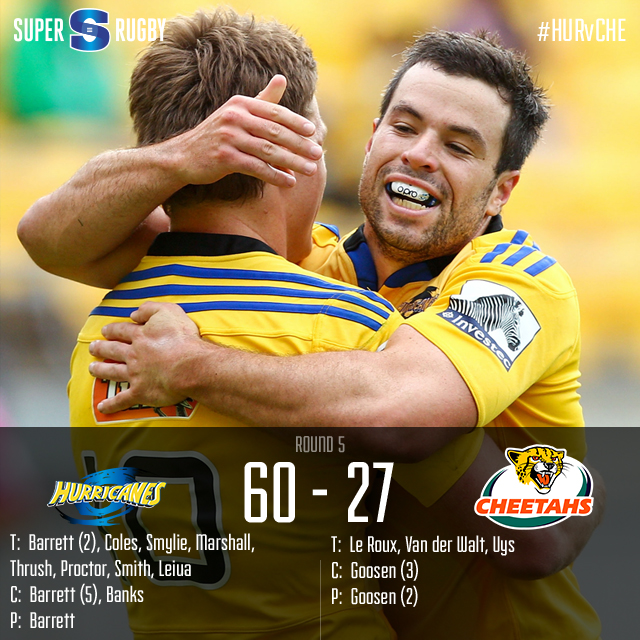