The Hurricanes secured a home semi-final in Super Rugby after they outclassed the Sharks, winning 41-0 in a clinical result in Wellington.

It was a superb performance in the wind and rain but in truth the Sharks were incredibly disappointing as they crash out of the competition.

Tries from Loni Uhila, James Marshall, Jason Woodward, Vaea Fifita, TJ Perenara and Brad Shields secured the result as the hosts were brilliant, becoming the first Super Rugby team to nil an opponent in the knockouts.

However, there was one blemish on this victory for the ‘Canes as captain Dane Coles suffered a rib injury that will concern their supporters.

In atrocious weather conditions it was clear who mastered the wind and rain the better, with the Hurricanes moving into the break 13-0 up.

Barrett was excellent as he mixed his kicking to perfection while in contrast Garth April had a horror none from three record off the tee.

It could have been different for the visitors as they had two penalties inside 10 minutes that April missed, with the wind having its say.

Barrett made no such mistake from bang in front on 13 minutes as against the run of play the Hurricanes led 3-0. The gap soon grew.

The All Black fly-half took control of the match from then on and his cross-kick out to wing Woodward led to Matt Proctor being brought to ground just one metre out. From the resulting breakdown, loosehead prop Uhila crashed over the line thanks to a fine angle to make it 8-0.

The Hurricanes had their tails up and Barrett was manoeuvring them superbly well, with a scrum inside the Sharks 22 resulting in their next try as Perenara went blind, sucking in Lwazi Mvovo to allow full-back Marshall a clear run-in to the line on the right wing. That was 13-0.

Just to add salt into Sharks' wounds the last scoring chance in the half saw April miss again, as it was clear who was on top at the break.

It was the Hurricanes who were hurting though two minutes into the second-half when their captain Coles left the field clutching his ribs.

But that pain was shortlived as an injection of pace from Perenara down the left sideline led to him handing a wonderful pull-back pass to Woodward who slid over. With Barrett drilling over the conversion low, suddenly the cushion was up to 20 points with 32 minutes remaining.

If the contest wasn't over at that point it most definitely was two minutes later and Perenara was the catalyst again, starting an attack on halfway before lock Fifita brushed off the tackle of April before striding over on the left side. Barrett added the two that made it a 27-0 gap.

Perenara turned from provider to scorer on 59 minutes when from Uhila's quick tap five metres out, the scrum-half spotted some non-existent fringe defence and dived over for a deserved try. Barrett, this time from a simpler angle, sent over the extras and it was becoming a rout.

Such was the manner and margin of the advantage Hurricanes head coach Chris Boyd then replaced Perenara, Barrett and Ardie Savea, but still the Sharks couldn't trouble the scorers, with the hosts fittingly having the final say when Shields slid over before Woodward's extras. 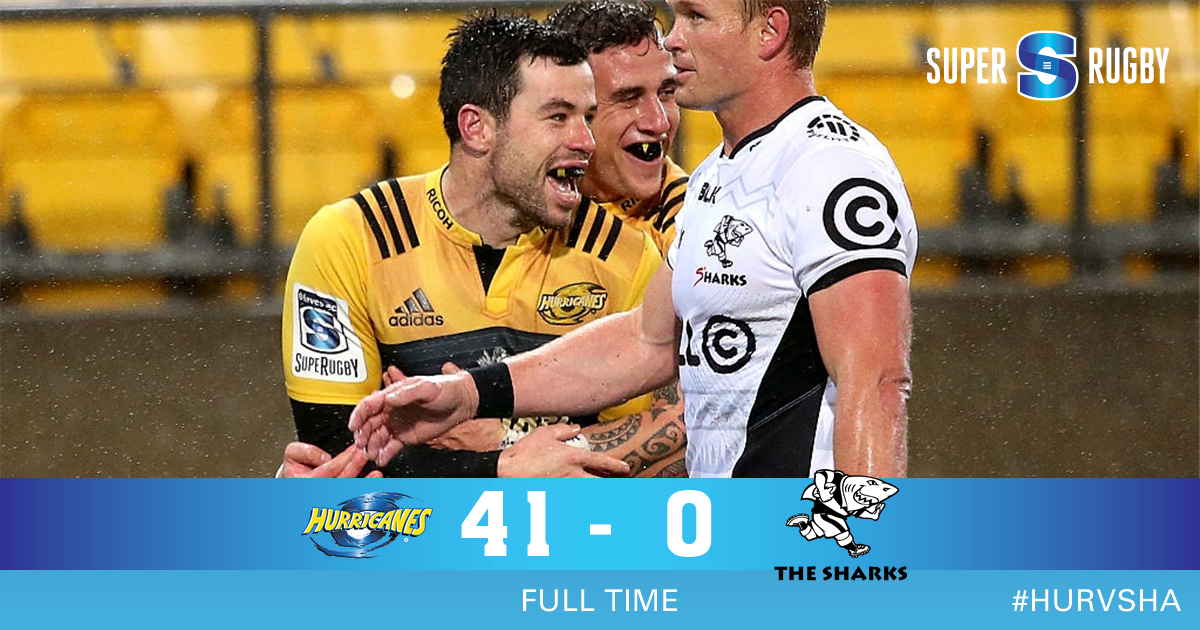