A late Jason Woodward penalty secured the Rebels a hard-fought 30-27 victory over the Reds in Brisbane on Saturday.

As the scoreline suggests, this was a closely fought contest and the Woodward's match-winning penalty was slotted in the 80th minute. This after the Reds' replacement lock Ed O'Donoghue was red carded for foul play.

Referee Steve Walsh sent O'Donoghue off on the recommendation of the television match offficial who ruled that O'Donoghue had eye-gouged Rebels skipper Scott Higginbotham during an incident off the ball.

The match was fiercly contested and the lead changed hands on several occasions.

The Rebels suffered an early setback when Walsh sent Higginbotham to the sin bin in the first minute. This after he clattered into Mike Harris after trying to charge down Harris' clearance kick. Walsh ruled that Higginbotham's challenge was a cynical one and issued the yellow card.

The Reds made full use of their numerical advantage and shortly afterwards Harris side-stepped past Bryce Hegarty, inside the visitors' 22, before crossing over for the opening try.

Quade Cooper slotted the conversion but, after Jason Woodward narrowed the gap with a penalty, the home side were dealt a blow when Cooper was forced off the field with a shoulder injury in the ninth.

The Wallaby fly-half stayed down after collapsing under a combined challenge from Laurie Weeks and Tom Kingston on defence.

The Rebels then struck back with a superb try. After winning a turnover, inside their half the visitors went on the attack with the ball going through several pairs of hands in the build-up.

PHOTO: (R)Ed O'Donoghue was sent off for this incident late in his team's loss to the Rebels in Brisbane #SuperRugby pic.twitter.com/hQJ7gfhrXZ

Colby Fainga'a and Woodward were prominent in the build-up and Tom Kingston was eventually rewarded for superb support play after gathering a pass from Woodward close to the Reds' try-line.

Harris drew his side level at 10-10 with a penalty in the 24th minute before Luke Burgess put the Rebels back in front with a superb five-pointer. The nuggety scrum-half showed great strength as he shrugged off four tackles before crossing over next to the goalposts.

The try was converted but the Reds made it 17-17 on the stroke of half-time when Gre Holmes forved his way over from close quarters after Ben Tapuai was stopped just short.

PHOTO: Quade Cooper is escorted from the field after injuring his shoulder in the early stages #SuperRugby pic.twitter.com/BmGKTnlyiO

The second half saw more enterprising play from the Rebels, whose decision to keep the ball in hand reaped benefits shortly after the restart when Burgess got in for an easy run-in for his second try.

Woodward converted and with the score at 24-17 the Reds were battling to get back into the game. They kept hammering away at the Rebels' line and were eventually rewarded in the 67th minute when Ben Lucas got their third try after running onto a pass from Will Genia.

In the 70th minute Woodward slotted another penalty, after the home side strayed offside on defence, and Harris thought he had clinched a draw with a place-kick five minutes later.

That wasn't to be, however, as Woodward's penalty secured victory for the Rebels after O'Donoghue's foul on Higginbotham shortly before the end. 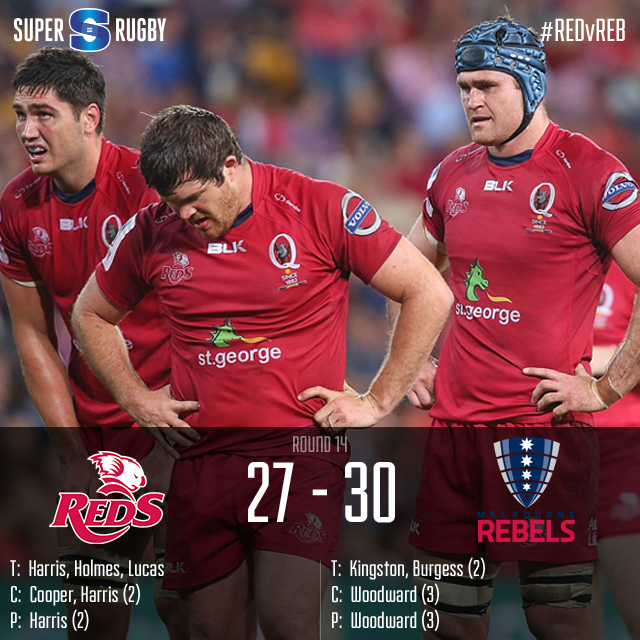