The Rebels started their Super Rugby campaign on a winning note with a 25-19 victory over the Force in Perth on Saturday.

The match was an eventful one for the Rebels' Reece Hodge who made a dream debut, scoring 20 points via two tries, two conversions, and two penalties.

Hodge, who was set to start on the left wing, was moved to full-back shortly before kick off after Jack Debreczeni withdrew through injury and Mike Harris slotted in at fly-half.

The visitors' centre, former All Black Tamati Ellison, also played a huge role in his side's victory and he set up both Hodge's tries with powerful runs before offloading to the debutant who had easy run-ins.

The opening quarter was a dour affair highlighted by several handling errors from both sides. Hodge opened the scoring for the visitors from the kicking tee shortly after kick off, before Jono Lance replied with two penalties which gave the Force a 6-3 lead.

Ellison then livened up proceedings with a telling break, beating several defenders before offloading to Hodge who got over under the posts.

That score was soon cancelled out by the hosts, Lance being rewarded with a try after bursting through two tackles deep inside the Rebels' 22 and, after adding the conversion, the Force were back in front at 13-10.

They didn't hold that lead for long however, as the Rebels struck back with another five-pointer shortly before half-time. Another former All Black, back-row Adam Thomson, rounded off in the right-hand corner after Ellison was again prominent with a strong carry in the build-up.

The second half's opening points came in the 43rd minute when Lance added a penalty, which meant the Rebels were holding a narrow 17-16 lead, but Hodge cancelled that effort out with a three-pointer of his own 10 minutes later.

The hosts stayed in touch with another penalty from Lance on the hour mark but Hodge secured the win for the Rebels when he crossed for his second try shortly afterwards.

The rest of the match was a war of attrition as both sides tried to gain the ascendancy but neither side added any points and the Rebels finished as deserved victors. 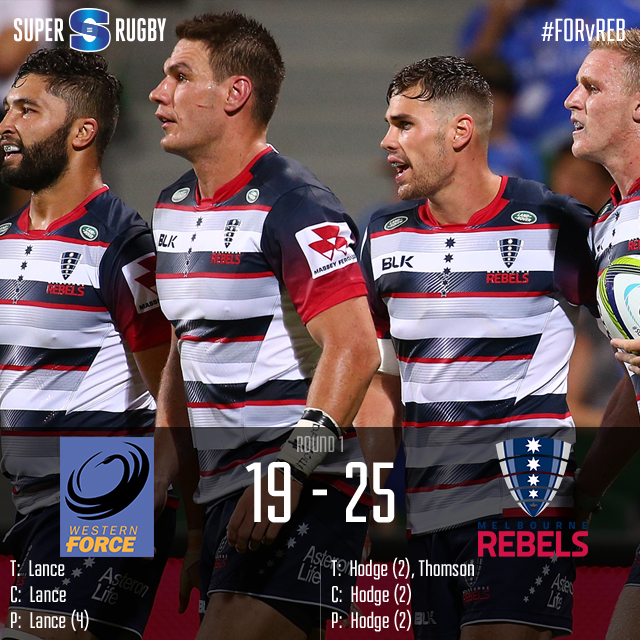