Reds edge past Stormers in Brisbane

The Stormers' miserable Australasian tour came to a close with a fourth straight loss, this time in a 22-17 defeat to the Reds in Brisbane.

Quade Cooper scored 17 points as the Reds never looked like racking up a try bonus point, but ground out a solid win in the second half to get their season back on track.

An error-riddled contest from two sides searching for their best form was packed with a high number of handling errors and turnovers at the breakdown, although it ended with an unexpectedly entertaining finish.

The Stormers tour of New Zealand and Australia has been a punishing one, with so much uncertainty reigning off the field regarding the future of the coaching staff headed by Allister Coetzee. They also lost Gio Aplon to a shocking elbow injury early in the first half.

It's been a tough run, combined with the raft of injuries they have especially in the second row to Eben Etzebeth, De Kock Steenkamp and Manuel Carizza.

Taking a win away from Brisbane would have been a huge morale boost, but they only managed a losing bonus point.

Where the Stormers do impress is in contact. They forced the Reds to commit more numbers at the breakdown, therefore containing their attack. Their tackling was brutal.

They even outscored the Reds two tries to one at Suncorp and could have snatched victory in the final few minutes, only to kick the ball away. It summed up their level of invention and their questionable tactics in attack.

The visitors lived up to their stat of possessing the worst lineout in the tournament, no surprise given the lock absentees, but even so Deon Fourie's throwing on his return to the number two jersey wasn't good enough.

For the Reds this was a welcome return to Suncorp, after their tour of South Africa ended with more discussion over the officiating in their matches than positive performances to take forward. Before kickoff they were bottom of the Australian Conference.

Cooper's first penalty attempt came back off the upright, but the Stormers scored the first try.

Good carries from Siya Kolisi and Nizaam Carr, who has impressed off the bench on this tour, ended with space out wide for de Allende to stroll over after some sharp handling.

Cooper made no mistake with his second penalty to make it 3-7 on the scoreboard to the visitors, before a lengthy stoppage.

Aplon's dislocated elbow injury caused a major pause in play, the Springbok departing but in some pain. Aplon, who has signed to play for Grenoble in the Top 14 next year, has been in stunning form of late and his loss was a significant blow for the visitors.

From Aplon's departure the Reds marched upfield and created their first try from a scrum. Jake Schatz, Will Genia and Dom Shipperley all interlinked perfectly to send the winger just short of the line, before Simmons burrowed his way over.

Cooper and Grant traded a penalty each to leave the hosts with a narrow 13-10 lead at half-time.

The Stormers defence was typically resilient in the second half as Genia and Cooper tried to create the necessary gaps, but a second try didn't look like happening.

A breakdown indiscretion from Fourie handed Cooper his second penalty, before the Australia fly-half added a fine drop goal with time running out to stretch the Reds lead to nine points at 19-10.

Unbelievably the Stormers lost another second row when Jurie van Vuuren departed after a heavy knock, but the Reds now were bubbling.

Looking to secure the win with another score, Sikhumbuzo Notshe, on debut, was penalised at the ruck on the edge of his 22 for Cooper to add another three points.

Notshe's debut then drastically improved when he dove over off the back of an unstoppable Stormers maul, the 20-year-old understandably elated as the Stormers drew back within five points thanks to the conversion from Demetri Catrakilis.

It set up a grandstand finish and the Stormers should have done more with promising field position when the clock entered the final three minutes, but the wrong option was taken when Catrakilis kicked the ball away, leaving the Reds to sneak home and get back to winning ways. 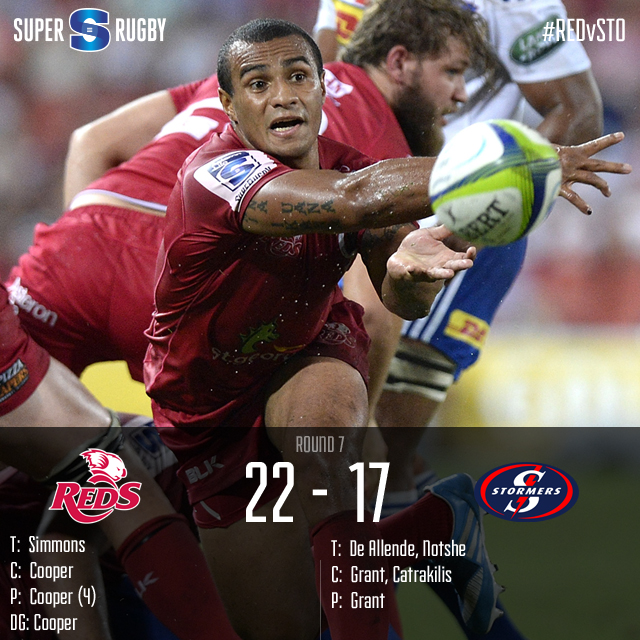