The Reds started their Super Rugby campaign on a winning note when they claimed a hard-fought 28-26 win over the Sharks in Brisbane on Friday.

As the scoreline suggests, this was a tense affair and although Kane Douglas and Karmichael Hunt were both yellow-carded and Quade Cooper missed several shots at goal the Reds did enough to hold on for the win.

In a tough and physical encounter, both sides stayed true to their attacking instincts by giving the ball plenty of air but were guilty of committing too many errors.

The Reds eventually got the rub of the green and outscored the visitors by four tries to two, although the Sharks will be kicking themselves as they dominated for large periods but failed to secure the result especially in the second half when Douglas and Hunt were sent to the sin bin.

The Sharks made a terrific start and were rewarded as early as the second minute when Jean-Luc du Preez went over for the opening try.

This, after Cooper knocked on close to the halfway line. The ball was snapped up by Lukhanyo Am who offloaded to Kobus van Wyk who, in turn, threw an inside pass to the on-rushing Du Preez who had an easy run-in under the posts.

Despite that setback it did not take long for the Reds to open their account when Cooper landed a penalty in the fifth minute but the Sharks restored their seven-point lead 10 minutes later when Lambie slotted a penalty of his own.

The Reds dominated the territory ans possession stakes for the next 10 minutes but all they had to show for their efforts was a 23rd minute penalty from Cooper after the Sharks were pinged for offside play in defence.

Three minutes later, Lambie added another penalty, after a Samu Kerevi indiscretion at a ruck, but the Reds cancelled that effort out when Scott Higginbotham crossed for their opening try after spotting a gap at a ruck close to the Sharks' try-line.

Cooper slotted the conversion which drew his side level at 13-13 but Lambie added another three-pointer from the kicking tee on the stroke of half-time which meant the visitors held a slender three-point lead at half-time.

Five minutes after the break, Lambie landed another penalty but the Reds struck back shortly afterwards when, after gathering the ball from Higginbotham at ascrum on the Sharks' five-metre line, Kerevi powered his way past two defenders before crashing over for a deserved try. 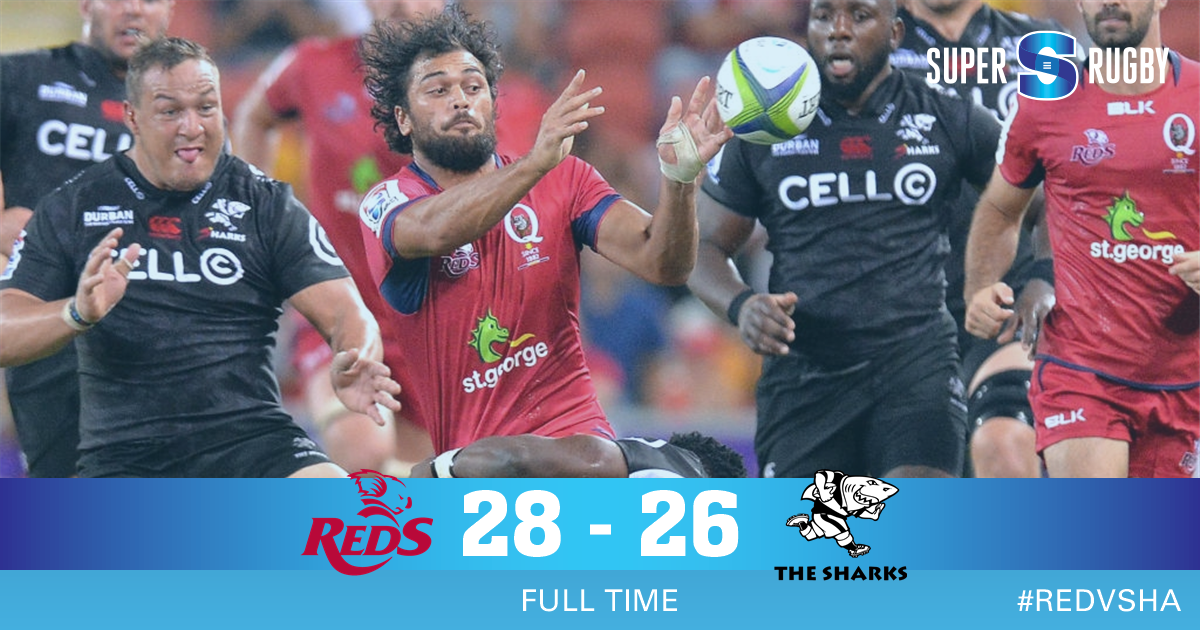 The Reds were reduced to 14 men in the 57th minute when Douglas was yellow carded for a challenge on Beast Mtawarira's neck and for the next 10 minutes the Sharks restricted play mostly to their forwards.

That tactic paid off when Tera Mtembu scored from a driving maul inside the home side's 22 and when Lambie slotted the conversion, the visitors had their tails up with the score 26-18 in their favour.

The Reds didn't surrender, however, and in the 63rd minute Kerevi crossed for his second try after bursting through a couple of tackles close to the Sharks' try-line.

Although Cooper missed with the conversion attempt, he made up for that miss when he combined brilliantly with Duncan Paia’aua to put James Tuttle in the clear for the Reds' fourth try.

That score gave the Reds the lead for the first time and although they finished the game with 14 men - after Hunt received his marching orders for a head high tackle on Lwazi Mvovo - they did enough to secure victory.