Sharks get job done in Durban

The Sharks saw off a spirited challenge from the Cheetahs at Kings Park, winning 26-10 to remain in the Super Rugby play-off positions.

With the Bulls having prevailed with a bonus-point against the Sunwolves, the Sharks had to win to keep their fate in their own hands going into the final round of the regular-season. It is they who host the Sunwolves next week.

Gary Gold's men are two points clear of the Bulls, who face the Cheetahs in Round 17, with the Pretoria side surely now set to miss the cut.

Unfortunately this was far from a pulsating match as only two tries, from JP Pietersen and Stefan Ungerer, troubled the scorers for the Sharks. Raymond Rhule had opened the try account for the Cheetahs who left with nothing.

It was a forgetful first-half for those who had turned out to watch in Durban, with a scrappy scrum not helping increase the game's tempo.

Only two tries were scored, one apiece, with the Cheetahs on top for the opening quarter before the Sharks bounced back before the break.

The hosts were down a man as early as the 15th minute when captain Tendai Mtawarira was yellow carded for an open-handed slap in the face of Cheetahs tighthead prop Maks van Dyk. Unfortunately there was an abundance of pushing and shoving from both packs that slowed the pace.

Four minutes later though the Cheetahs were on the board and the try came from Rhule, who finished off some good work from Francois Venter on the left wing. With fly-half Fred Zeilinga, playing against this former outfit, slotting the extras the Cheetahs were leading by seven.

Garth April did respond from the tee for the Sharks on 19 minutes but soon after came a period of Cheetahs dominance at scrum-time. They were awarded three successive penalties by referee Stuart Berry on the Sharks' five-metre, but somehow the home side came away unscathed.

Knowing they simply had to improve or hand the play-off initiative to the Bulls, the hosts finally gave their supporters a reason to cheer five minutes before the break when centre Pietersen was found on the left and the Springbok did well to check back inside for a 10-7 lead.

Zeilinga levelled though soon after the break when Sharks hooker Franco Marais did not roll away at the breakdown, with the Cheetahs eager to back up last weekend's narrow win over the Force with a result at Kings Park, with the Cheetahs having won 35-29 at this venue in 2015.

However the Sharks somehow managed to reset their scrum and in fact enjoyed their strongest set-piece of the game on 52 minutes, which won them a penalty April converted for 13-10. As it stood they were two points clear of the Bulls in that race for the knockout position.

And they admirably pulled away from then on with another April penalty on the hour mark followed by an opportunistic try from Ungerer, who collected a stray pass on the Cheetahs ten-metre before setting off for the uprights. Suddenly the hosts were cruising at 23-10 up.

That was how things stayed until full-time with this result very much a case of job done for the Sharks, who must now finish the job against the Sunwolves. 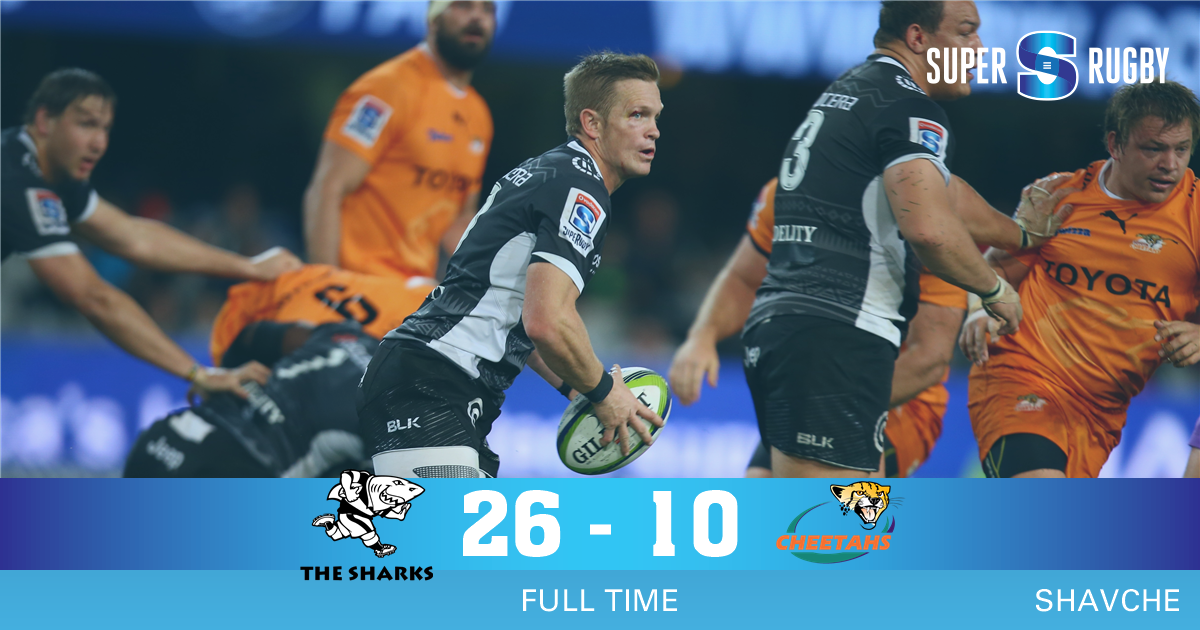