The Sharks battled past a spirited Jaguares side to claim a 18-13 victory at King's Park in Durban on Saturday.

The home side were ahead early on after a Cobus Reinach try but the Jaguares hit back with penalties from Nicolás Sánchez.

The Sharks then retook the lead after a try from Andre Esterhuizen before Agustín Creevy scored his side's first try of the match. The game was sealed after Bosch knocked over a penalty in the 77th minute.

The two sides were tied at 18 points before the fixture which means the Sharks now go to 22 points in Africa 2 Conference, one point out from the table-topping Lions. The Jaguares get one point from the game from being within seven points of their opposition.

The Sharks drew first blood after the Jaguares were moving the ball around the park beautifully before a handling error close to the Sharks' line, which Reinach picked up and ran the length of the park to score with the conversion being missed.

The visitors responded quickly when the Sharks were penalised and Sánchez made no mistake in slotting over a three-pointer before and three minutes later took the lead after another penalty making the score 6-5.

They had the chance to make it 9-5 after Reinach high-tackled Jerónimo de la Fuente after a fantastic run but the Argentine fly-half missed that one and another moments later. The Sharks were warned about the amount of penalties they were giving away.

And the hosts nearly scored after Bosch made an electric break up the field and before being tackles out, swung the ball inside which the Sharks couldn't make anything of before the Jaguares picked up and countered with.

The Sharks regained the lead after pressing on the Jaguares 22 metre before Inny Radebe was hit by a no-arm tackle and the home side were given the penalty which Bosch knocked over.

The home side nearly scored just before the half-time buzzer after a strong surge from the forwards to take the ball right up field before the ball was ripped off Lukhanyo Am and the Jaguares kicked for touch.

But that went right into the hands of Bosch who rounded the opposition defence but just knocked on in the corner making the half time score 8-6 to the home side.

The Sharks were obviously given some inspirational words at the break because they came out of the blocks firing and after a fantastic run of play were it looked like the whole team had used the ball before Am was tackled out.

The Jaguares had a scrum and were pushed back by the Durbanites meaning the Sharks had a penalty and kicked for touch. They used a maul well and inside centre Esterhuizen charged over the line before Bosch added the extras.

Reinach looked as though he had scored his second try of the match after some clever interplay from the Sharks but there was a mix of crossing and knock ons and the ball was called back for a Jaguares scrum on their own five metres line.

The Jaguares went down to 14 men when Andre Esterhuizen made a telling break and off loaded to Radebe but as the fly-half was about to take the pass he was tackled by Sánchez which saw the number 10 sent off with a yellow card.

Creevy scored his side's first try of the match when the visitors pushed the Sharks back over the line after a driving maul from a line out.

The try was referred to the TMO to determine how the ball got over the line but they couldn't find any evidence but the try was given anyway after referee Angus Gardner saw the try being scored which made the score 15-13 after the conversion.

For the last 10 minutes it looked as though the South Americans might be able to disrupt the status quo but the Sharks were given a penalty and Bosch kicked it through which was the final nail in the visitors' coffin. 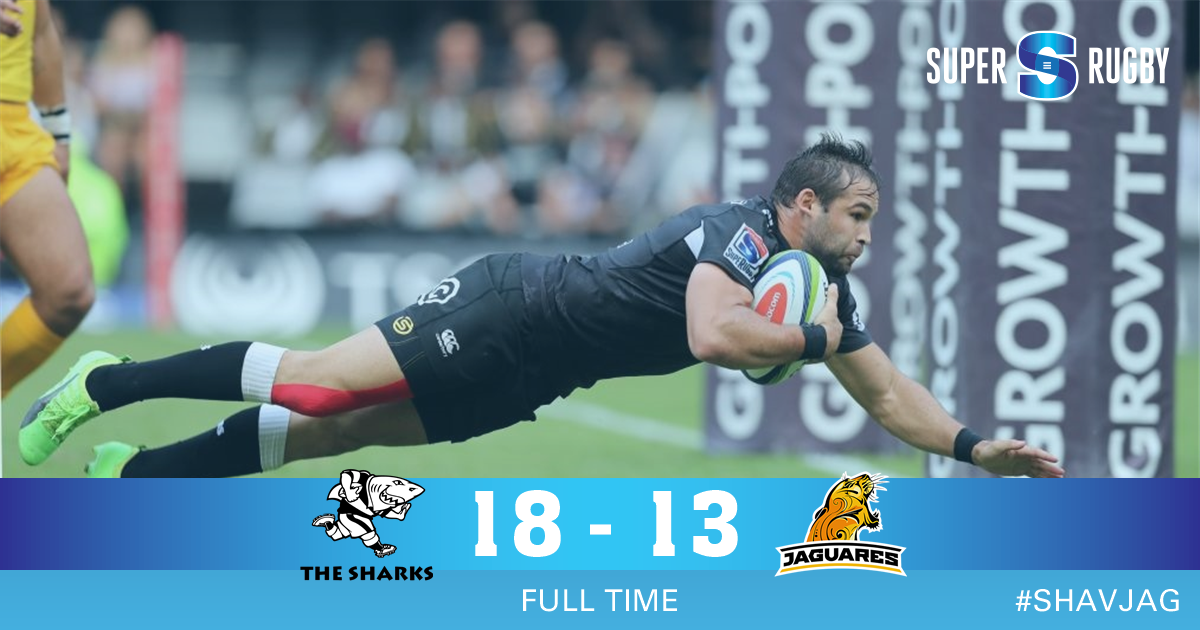