The Sharks secured their path into the Super Rugby last-eight at the expense of the Bulls after seeing off the Sunwolves 40-29 in Durban.

Only a loss or draw would open the door for the Bulls to progress and despite two hairy moments, the Sharks got the victory on Friday.

In reply the Sunwolves crossed four times via Kaito Shigeno, Mifiposeti Paea (2) and Faatiga Lemalu as they end their season strongly.

The Sharks now prepare to travel to either Johannesburg next week or New Zealand, depending on how the results play out on Saturday.

It was smooth sailing early on for the hosts as they crossed twice inside the opening eight minutes for a 14-0 lead. Those tries showed both physicality up front and a clinical edge in the backline as prop Oosthuizen barged over before wing Mvovo cruised to the try-line.

A glimmer of hope arrived for the Sunwolves on 14 minutes when scrum-half Shigeno was put through the middle of a line-out near to the line to make it 14-7. Add in Sharks centre Esterhuizen fumbling a metre out soon after and it was a positive minute for the visitors.

However at that point one felt it was only delaying the inevitable and so it proved as Pietersen, playing in his final home game, was sent over by wing Odwa Ndungane. With April landing the touchline kick the buffer was back up to 14 points as the Sharks were 21-7 ahead.

How wrong those watching in Durban and at home were as then began a Sunwolves revival that delighted their coaches. First Paea barged his way over on 36 minutes and then Lemalu made it 21-19 with a short carry. Only a missed kick meant they went in 21-19 behind.

The Sharks clearly were read the riot act by their own coaches at the break and it worked as with barely two minutes gone, big centre Esterhuizen slid over on the right wing after a good offload from Ndungane. Another solid April conversion pushed them 28-19 in front.

But the Sunwolves wouldn't go away and when Tamura kicked a penalty on the hour to make it 28-22, suddenly they were six behind.

The Sharks hit back with a lovely try from April down the right, after an interchange with Pietersen, and when replacement back Bosch crossed the whitewash with four minutes remaining, they had the try bonus-point in their pocket and were clear at 40-22 to the good.

But deservedly the Sunwolves had the final say through impressive centre Paea, as they ended their debut campaign on a high while the Sharks' season continues, for another week at least, with their destination as yet unknown. In this form it mightn't last longer than that. 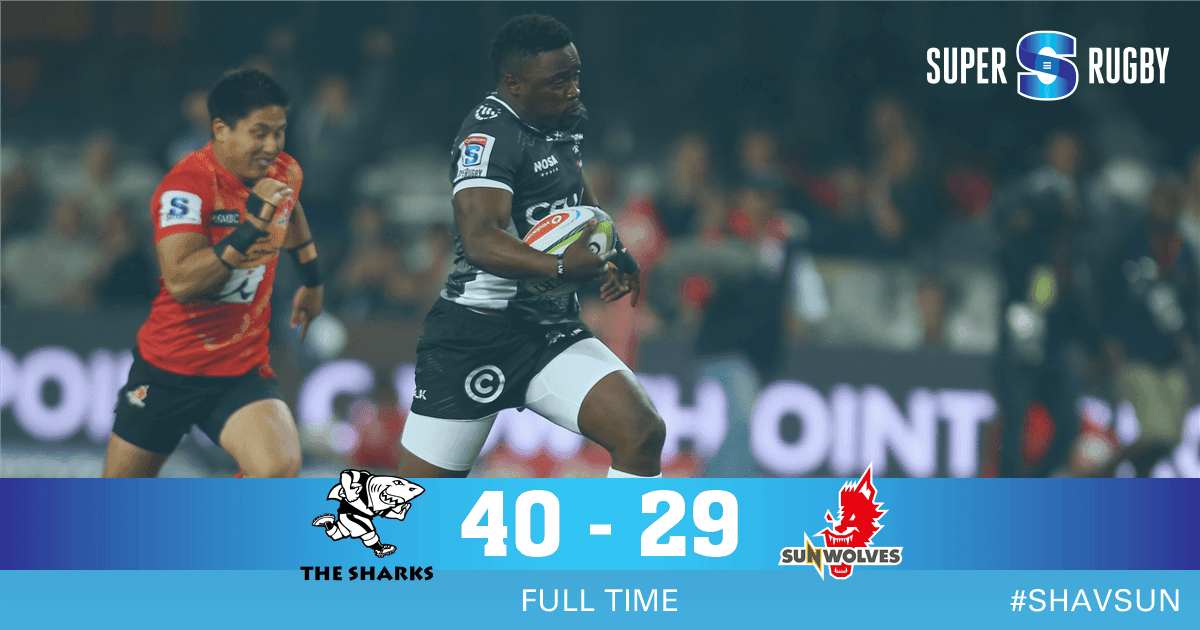