Sharks too good for spirited Jaguares

The Sharks got the job done but were made to graft for their 33-25 victory over the Jaguares in Buenos Aires on Saturday.

As expected, this was a closely fought encounter and the lead changed hands on several occasions. The two teams deserve credit for making this the entertaining spectacle that it was and both sides crossed for three tries apiece.

The result means the Sharks consolidate second spot on the Africa 2 Conference table, behind the Lions, while the Jaguares are still third albeit only five points ahead of the Kings who beat the Rebels ealrier on Saturday.

The Sharks made a terrific start when, from the kick off, they took the ball through a plethora of phases until they were camped inside the Jaguares' 22.

Chiliboy Ralepelle and Daniel du Preez were particularly impressive and gained plenty of ground with strong carries and the visitors were rewarded when Philip van der Walt barged over from close quarters after spotting a gap at a ruck on the Jaguares' five-metre line.

The next 15 minutes saw both sides bsttling to gain the ascendancy although two penalties apiece from Nicolás Sánchez and Curwin Bosch were the only points during this period.

Midway through the half, the Sharks suffered a setback when they were reduced to 14 men after Michael Claassens was yellow carded for a cynical infringement on defence deep inside his half.

Five minutes later, the home side took advantage of their numerical advantage when Bautista Ezcurra joined the line at pace and offloaded to Joaquín Tuculet who dived over in the right-hand corner.

Sanchez added the extras which meant the sides were level at 13-13 but the home side continued to dominate and were rewarded in the 35th minute when Matias Orlando crossed after they attacked from a scrum deep inside the Sharks' half.

To their credit, the Sharks did not take that lying down and four minutes before half-time Etienne Oosthuizen dotted down under the posts after Rhyno Smith laid the groundwork with a brilliant run in the build-up.

Bosch added the extras which meant the sides were level at 20-20 as they changed sides.

The second half was a more cagey affair but the Sharks regained the lead in style when Thomas du Toit crossed the whitewash after gathering from fellow prop Coenie Oosthuizen, who did well in the build-up with a strong run.

Bosch added another penalty on the hour-mark which meant they led 30-20 but the home side did not surrender and struck back when Bautista Ezcurra crossed for their third try after Tuculet did brilliantly by gthering his own high kick - just outside the Sharks 22 - before offloading to the winger.

That gave the Jaguares a glimmer of hope but although threy tried gallantly to haul the men from Durban in they could not not add to their points tally.

The Sharks sealed the win in the game's dying moments when Bosch slotted his fourth penalty which denied the hosts a bonus point. 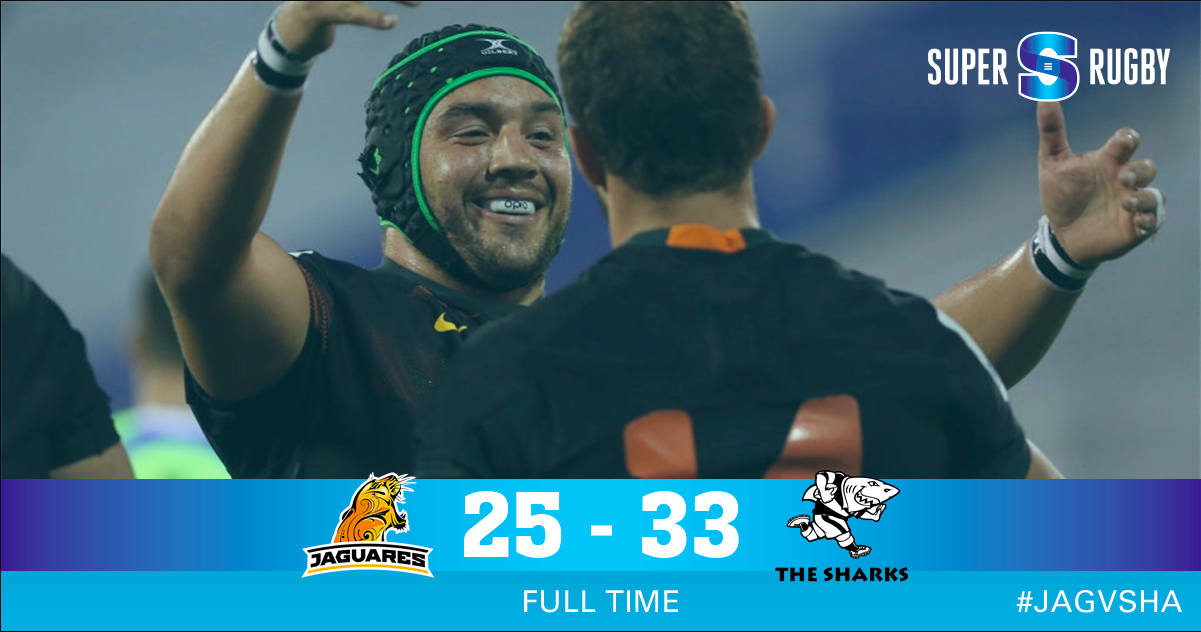