The Brumbies finished their overseas tour on a high when they claimed a deserved 39-15 bonus-point victory over the Jaguares in Buenos Aires.

The men from Canberra were keen to build on last weekend's win over the Kings in Port Elizabeth and were full value for their win, eventually outscoring their hosts by six tries to two.

An impressive first half performance laid the foundation to the Brumbies' win with brace of tries from Tom Banks and another five-pointer from Sam Carter helping them to a 20-10 lead at half-time with the Jaguares' only try of the half scored by Tomás Lavanini.

The home side's discipline let them down badly and they committed a plethora of unforced errors which helped the Brumbies' cause.

The Brumbies win extends their lead t the top of the Australian Conference table and they now have a nine-point lead over their closest rivals, the Waratahs.

Meanwhile, the Jaguares are still in third spot in the Africa 2 Conference standings, 18 points adrift of the second-placed Sharks.

The Jaguares took an early lead thanks to a third minute penalty from Nicolás Sánchez before the Brumbies struck back 10 minutes later when Sam Carter crossed for the opening try off a driving maul deep inside the home side's 22.

The Jaguares did not take long to reply - Lavanini barging over from close quarters and with Sánchez off the field for a Head Injury Assessment, Santiago Gonzalez Iglesias added the extras which gave the home side a narrow 8-7 lead by the 20th minute.

The rest of the halkf belonged to the Brumbies and Banks in particular as he crossed for two deserved tries during a five-minute period.

His firsr five-pointer came in the 25th minute when he joined the line at pace and gathered a pass from Wharenui Hawera before dotting down.

Shortly afterwards, Batista Ezcurra dropped a high ball close to his 10-metre line which Chris Alcock picked up. The flanker did well to deliver a perfectly-weighted chip kick which Banks gathered before diving over in the right-hand corner.

Just before half-time, the Jaguares suffered a further blow when their captain, Agustin Creevy, was yellow carded for cynical play on defence deep inside his half.

The second half came alive in the 56th minute when Joe Powell offloaded to Henry Speight, who burst through a gaping hole in the Jaguares' defence before crossing for their fifth try.

The Brumbies continued to attack in the final quarter and two tries in quick succession from replacement back Andrew Muirhead sealed their win although the Jaguares added some respectabilty to the score when Guido Petti scored their second try shortly before full-time. 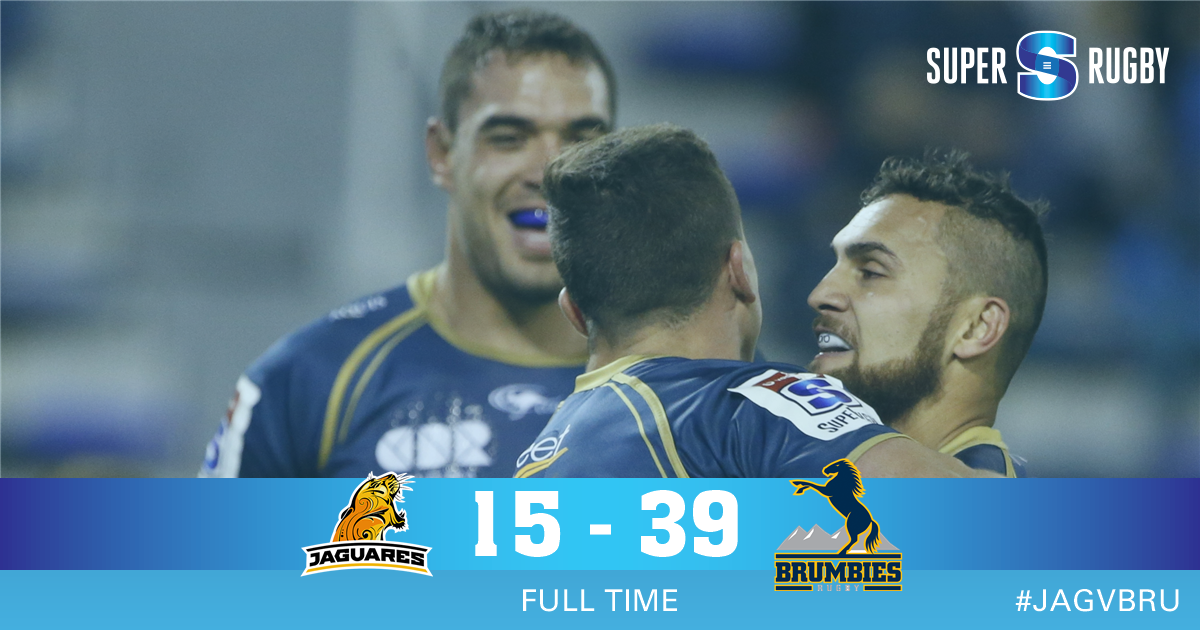