Some people say winning is all about getting off to a good start, whilst others firmly believe the key to victory is all about a strong finish, so which of these theories holds up in Super Rugby this season?

We look at the amount of tries scored and conceded during each period of the game in Super Rugby this season, as we take a more in-depth look at the scoring patterns in this season’s competition.

The best way to analyse this is to look at each conference and where better to start than in New Zealand with the Hurricanes, who sit at the top of the overall standings.

The 'Canes have won all but one game in 2015 and they have done so by performing well in each quarter of the game, outscoring their opponents in each 20 minute period. They have been particularly strong, however, in the final 20 minutes of their games, managing more tries than any other team in that time (10), whilst only three teams have conceded fewer in the same segment than the Wellington-based side (3).

The Chiefs sit just one point behind and the Hamilton-based side is similar in that they finish games well, scoring the joint-second most final quarter tries (7), and conceding the joint-fewest too (1). However the Chiefs have been remarkably consistent this year, scoring and conceding a similar amount of tries in the first half as they do in the second.

We could also turn the analysis on its head too, and look at whether underperforming teams start or finish poorly.

The Blues have endured a poor season, getting off to a slow start in many of their games as they have conceded a league-high eight tries in the opening 20 minutes of games this year. However they have picked up their game in the second and third quarters, before being outscored in the final 20 by four tries to two, all of which serves to highlight that a poor start and a poor finish is a recipe for disaster regardless of what goes on in those middle minutes.

On to South Africa, where the Bulls sit two points ahead of the Stormers at the head of their conference.

In terms of five-pointers, the Pretoria-based side has performed better in the first halves of their games this season, scoring three more tries than their opponents in each of the first two quarters, before being outscored by three tries in the second half of their games. 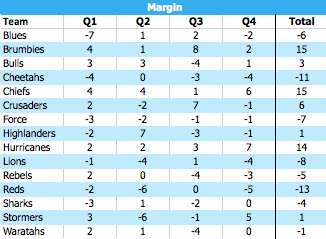 Elsewhere in South Africa, the Stormers have started games well before tailing off either side of half time and then hitting a crescendo in the final 20. They have scored seven and conceded just two in that time.

The Cheetahs, South Africa’s lowest ranked side so far in 2015, have done the opposite of the Stormers, sandwiching an improved middle 40 minutes with a poor start and disappointing finish.

The Brumbies lead the way in Australia and in terms of scoring, have performed well in the first and third quarters of their games. However it can be argued that they also finish strongly, as they have conceded just one try in the final quarter of their games, and just two second half tries overall - a competition-low.

Staying in the Australian Conference, the Waratahs have started better than they have finished this season, but have not excelled in any category, and are befitting of their mid-table status as a result. The Rebels, meanwhile, let down a steady start with a poor ending, whilst the Reds and Force will be disappointed with their performances in each segment of their matches.

The findings? Cliché maybe, but a game can be lost if not won in the opening stages of Super Rugby.

The final moments of matches in our sport, particularly in such a competitive competition, are extremely important and it is the front-runners’ longevity that is separating them from the rest of the chasing pack at the moment.

It seems though a lapse either side of half-time can go unpunished and the figures confirm that it is immensely difficult for any side to sustain authority throughout a Super Rugby match.