A late converted try – scored by Deon Fourie and converted by Demetri Catrakilis – secured the victory for the hosts, who trailed the Hurricanes by 6-12 at half-time.

The ‘Canes scored two tries to one and were leading 18-12 going into the final five minutes of the match.

However, the Stormers showed great guts and a never-say-die attitude to keep the pressure on the ‘Canes and eventually secure the vital victory in front of a loyal crowd of 31,814 at Newlands.

Fourie’s try, in the 77th minute, was scored near the right-hand corner, but Catrakilis showed nerves of steel to land the crucial conversion from out wide.

The Stormers were forced to make their tackles as the visitors took the game back into the home team’s half during injury-time, but they knocked the ball on after a few phases as the DHL Stormers grabbed a morale-boosting win ahead of their upcoming four-game tour of Australasia.

“Credit to the Hurricanes, they made it tough for us out there tonight,” said Stormers captain Jean de Villiers afterwards. “We had a very tough week, some harsh words were spoken, but we picked up a crucial win ahead of our tough tour – we’re grateful for it, but know we need to improve as the tournament progresses.” 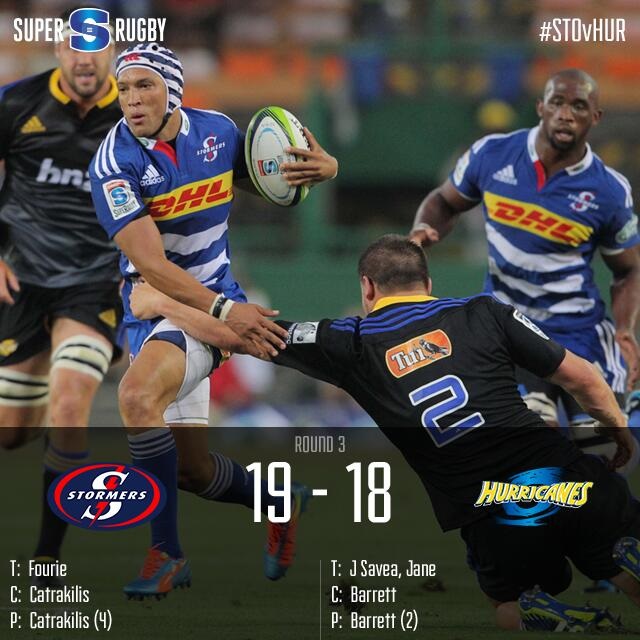