The Stormers got the job done at DHL Newlands on Saturday, beating the Cheetahs  42-12 in a lopsided South African Super Rugby derby.

This was a far cry from the shock defeat in Bloemfontein earlier this month as the Stormers led from start to finish, outscoring their visitors five tries to two and claiming just their fifth attacking bonus point in four years.

It's a crucial result in the Stormers' bid to finish second in the overall standings and secure a home Semi Final. It also sets up a potential conference decider against the Lions next week.

The Stormers led 23-7 at the interval thanks to two tries from Springbok Sevens star Seabelo Senatla and a handful of penalties from Demetri Catrakilis. The home side had enjoyed around 65 per cent of territory and possession, and the lead could well have been larger.

Damian de Allende, Vincent Koch and Sikhumbuzo Notshe all went over in the second half, making Cheetahs coach Naka Drotske's last game in charge one to forget.

The Stormers ruled in every department, with the scrum especially dominant.

Catrakilis opened the scoring from the tee early on and the first try was soon to follow as Senatla powered over in the corner after a break by De Allende - who had an excellent game - exposed the Cheetahs defence.

Catrakilis added the conversion and could extend the lead further after a great chase from Senatla lead to another penalty to leave the Stormers 13-0 up inside ten minutes.

An attempt to force another try via a five-metre scrum failed, but another three points from the home flyhalf kept the scoreboard ticking.

The Cheetahs had hardly seen the ball in first quarter, but they scored with their first attack as Boom Prinsloo crashed over at the back of a maul. Ex-Stormers playmaker Joe Pietersen added the conversion, but his influence on the game was minimal.

De Allende and Dillyn Leyds combined to take the Stormers back into the Cheetahs' 22 before Senatla profited from some slack defending to step his way over under the sticks following a solid scrum.

Catrakilis made sure of the extras to give the home side a 16-point gap before the break although the Cheetahs survived another siege thanks only to Clayton Blommetjies knocking the ball from Juan de Jongh's hands with the line in sight.

Cheetahs' number eight Henco Venter added a nail to his team's coffin, earning a yellow card for a high tackle on Cheslin Kolbe and the Stormers made the extra man count as De Allende sniped over after a maul was stopped just short.

Again Catrakilis was on target with the conversion and the home side had over half an hour to search for that ever-elusive fourth try.

It came on the hour mark, Koch crashing over from short range amidst heavy traffic. Of course, Catrakilis converted.

Notshe added some gloss to the scoreline with the fifth try with a sprint into space on the overlap. Replacement flyhalf Kurt Coleman's conversion effort went wide, reminding everyone of his horror show in the Free State the last time these teams met.

There was a consolation try for the Cheetahs, again courtesy of a maul, as Carel Greeff crossed the whitewash, but it did little to dampen the festive atmosphere as DHL Newlands celebrated a well-deserved victory. 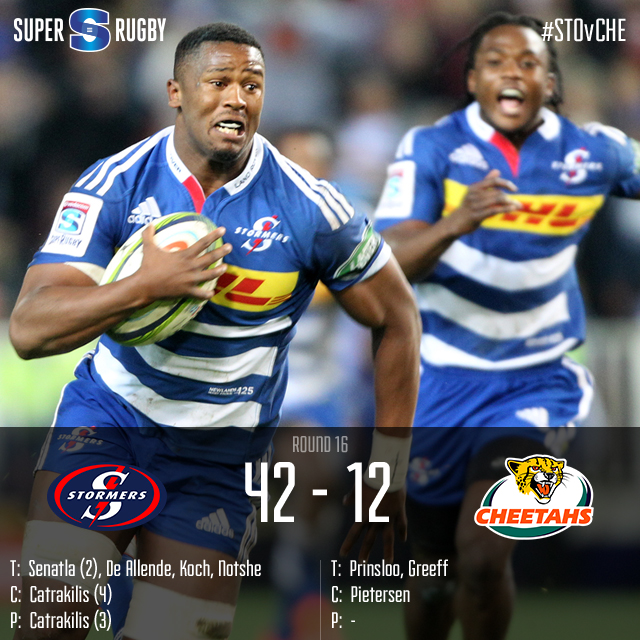