The Stormers claimed their fifth win of the Super Rugby season as they beat the Sunwolves at DHL Newlands, prevailing 46-19 on Friday.

It was a bonus-point success for the Capetonians, putting them nine points clear of the Bulls, who face the Kings on Saturday, in Africa 1.

Tries were scored by Sikhumbuzo Notshe (2), Kobus van Wyk, Scarra Ntubeni, Juan de Jongh, Louis Schreuder and Jean-Luc du Plessis, with the away side responding though Riaan Viljoen (2) and Yuki Yatomi in their sixth straight loss.

It was one-way traffic from the outset at Newlands with the Stormers crossing for four first-half tries before the Sunwolves had scored.

Young fly-half Du Plessis enjoyed an impressive debut and settled any nerves that might have been bubbling under the surface with an early strike at goal before he showed touches of class. However, it was the forward pack who earned the majority of the praise as they dominated proceedings.

HIGHLIGHTS: See all 10 tries here as the Stormers proved too good for the Sunwolves in Cape Town, chalking up their fifth win of the #SuperRugby season.

The first try came from the set-piece as an attacking scrum got the Stormers going forward before Notshe crossed off the fringe of a ruck.

Du Plessis then set up Van Wyk on the right sideline and despite missing the touchline conversion, the hosts had a comfortable 15-0 lead.

15 soon became 20 when this time the lineout provided the score, a slick move involving Siya Kolisi setting up hooker Ntubeni for the try. Another crossing would come from the resulting restart too as Cheslin Kolbe's breakout led to De Jongh finishing off on the left side.

Fortunately for the Sunwolves they did strike back before the interval when Viliami Lolohea's powerful carry was finished off by Viljoen, but it felt like being only a momentary blip for the Stormers as both teams went into their respective dressing room with the scoreline at 27-5.

Mark Hammett's side though were first to strike in the second-half when a lovely show and go from scrum-half Yatomi closed the gap.

But one always felt the Stormers could score plenty more in the game and it was no surprise they hit back five minutes later as Du Plessis found Notshe on the right and he galloped over to make it 34-12 with the conversion. The task now for the hosts was to open the floodgates.

Scrum-half Schreuder helped do just that in the 55th minute when he spotted weak fringe defence around the ruck and made the Sunwolves pay, with the home outfit now having six tries to their name and hunting more in the last 20 minutes in front of their expectant supporters.

Credit to the Sunwolves, who responded again through Viljoen on 65 minutes, but after Tim Bond was red carded for a shoulder charge on Kolbe, it was fitting that fly-half Du Plessis would have the final say. The youngster's brilliant individual try, that saw him grubber the ball past three men, was the icing on the cake for the Stomers in a comfortable win. 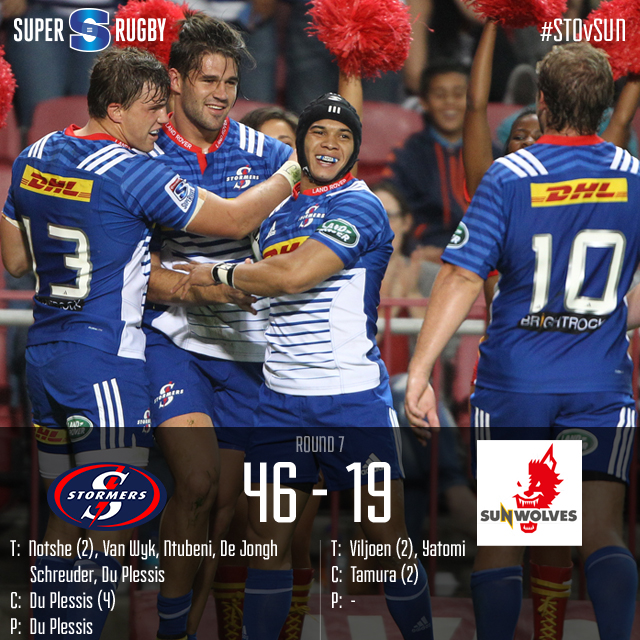