The Stormers ended their four-match winless run when they claimed a hard-fought 30-22 victory over the Blues in Cape Town on Friday.

In a thrilling and uncompromising encounter, played at a frenetic pace, both sides scored three tries apiece although the Stormers finished stronger after the Blues finished the match with 14 players when Matt Duffie received his second yellow card in the 67th minute after he halted play in a cynical fashion deep inside the Stormers' half.

The result means the Stormers consolidate their position at the top of the Africa 1 Conference standings while the Blues are still languishing at the bottom of the New Zealand Conference table.

The Blues held a slight edge during the opening half and tries from George Moala and James Parsons - of which one was converted by Piers Francis - gave them a slender 12-10 lead at half-time with a Siya Kolisi try and a conversion and penalty from SP Marais the Stormers' contribution during that period.

Although both sides tried to take control of proceedings after that, there was little interesting to report for the next 10 minutes although the Blues were dealt a blow in the 12th minute when Duffie was sent to the sin bin when he strayed offside on defence deep inside the home side's half.

Midway through the half, the Stormers also had a man sent to the sin bin. Eben Etzebeth being the culprit for landing a blow to the face of Akira Ioane during a needless scuffle off the ball.

Etzebeth's departure had an immediate impact on the game as from the resulting scrum - on the Stormers' five-metre line - the Blues set up a couple of phases until Charlie Faumuina did well to draw in a couple of defenders before offloading to George Moala who dotted down under the posts.

The Stormers did well to contain the visitors for the next 10 minutes but shortly after Etzebeth's return from the sin bin, Sonny Bill Williams took the ball into contact inside the Stormers 22 before striking out wide again.

And once again, it was Faumuina who threw the final pass, this time to his captain, James Parsons, who had an easy run-in in the right-hand corner.

Francis failed with the conversion attempt although the Blues had their tails up with the score at 12-3 in their favour. The Stormers needed to score to stay in the game and they did just that on the stroke of half-time when Siya Kolisi went over next to the uprights after Dillyn Leyds was stopped just short of the try-line in the build-up.

Five minutes after the restart, the Blues scored their third try when Williams gathered the ball at a ruck deep inside the Stormers' half before offloading in trademark fashion to Blake Gibson, who dived over from close quarters.

Francis added the extras - which meant the visitors led 19-10 - but shortly afterwards, he was forced off the field when he injured himself after a heavy challenge from Shaun Treeby.

The Stormers reduced the deficit in the 54th minute via another Marais penalty and on the hour-mark they scored their second try when Leyds caught the Blues defence napping when he played quickly from a penalty before barging over.

Marais slotted the conversion which meant the Stormers were back in front with the score at 20-19 and they upped the ante on attack in the final quarter.

The visitors had to finish the match with 14 men when Duffie was sent off after diving onto Cheslin Kolbe on the ground, when the Stormers were on the attack deep inside the Blues' half.

Shortly afterwards, Sikhumbuzo Notshe got his name onto the scoresheet when he dotted down from close quarters after Damian de Allende was stopped just short after a surging run in the build-up.

Bryn Gatland narrowed the gap with a penalty in the 74th minute but Marais secured the win with a three-pointer of his own from the kicking tee four minutes before full-time. 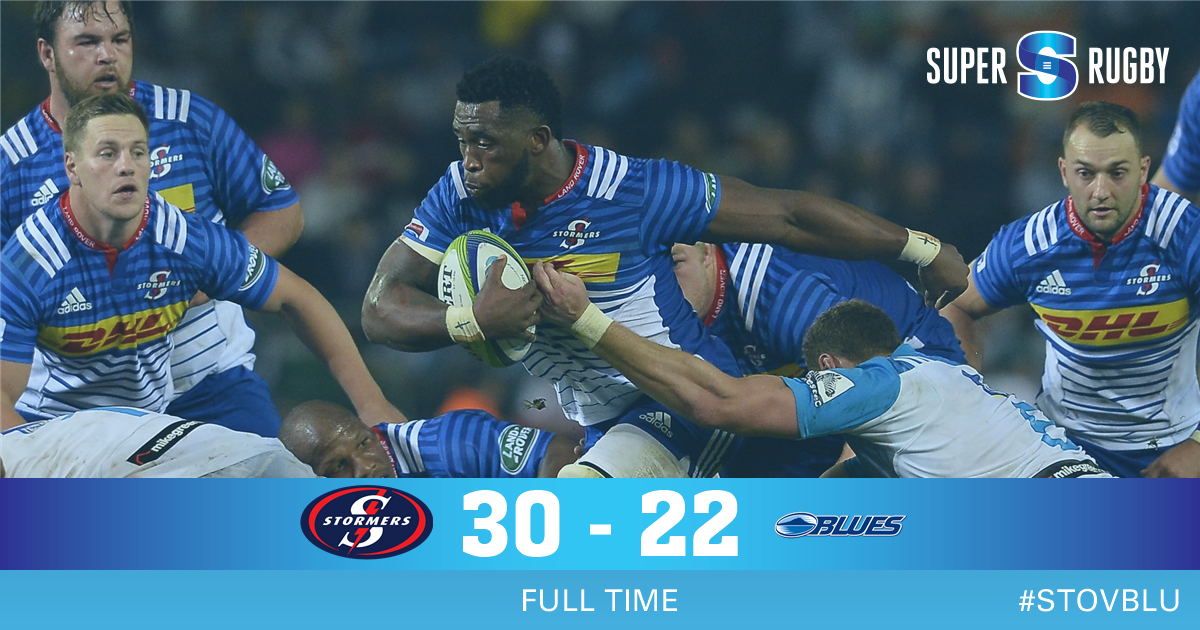