The Stormers claimed their fifth win of the Super Rugby season on Saturday with a clinical 33-0 victory over the Cheetahs in difficult conditions at a windy DHL Newlands in Cape Town.

The result sees the Stormers leapfrog the Cheetahs and Rebels as they climb to eleventh in the overall standings.

Despite playing against the wind, the Stormers led 15-0 at half time thanks to tries from hooker Deon Fourie and wing Kobus van Wyk.

Flanker Siya Kolisi added a third try to rub salt into the wounds of the well-beaten Free Staters before winger Sailosi Tagicakibau secured the bonus-point fourth try in the closing stages.

There was bad news for the Stormers before kick-off though when Springbok captain Jean de Villiers was ruled out with a knee injury. He will undergo a scope in Cape Town on Sunday to determine the full extent of the injury but has been withdrawn from the upcoming Bok training camp. And there were further concerns for the national team when Schalk Burger did come out for the second half after a knock to the neck.

The Stormers opened the scoring early on when Fourie crashed over at the back of a textbook maul. The howling north-westerly wind had it's way with Kurt Coleman's conversion attempt but the home side would have nevertheless been happy with a 5-0 lead.

Indeed, the blustery conditions made going for goal a lottery and the Cheetahs did a lot of kicking into the corners, but got little reward from the resulting line-outs

Cheetahs skipper Adriaan Strauss was given ten minutes in the bin for a tip tackle on Van Wyk and Coleman landed his first penalty a few minutes later after the Cheetahs were pinged at scrum time.

The Stormers got their second try shortly before the break when van Wyk stepped past Willie le Roux to end a counter-attack started in the Stormers half by Cheslin Kolbe.

Coleman extended the gap just after the restart when Boom Prinsloo was caught offside and replacement fly-half Peter Grant gave the home side a 21-point lead on the hour mark when Hilton Lobberts was pinged for not rolling away.

Kolisi, who replaced Burger at half time, cruised over for the third try with ten minutes left after Damian de Allende straightened the line to draw two defenders and put his flanker away.

Stormers lock Michael Rhodes saw yellow for hair pulling in the dying minutes but the numerical disadvantage didn't stop the hosts from bagging the bonus point as Tagicakibau pounced on the loose ball after le Roux had tried to swat a Grant chip kick away with his hand. 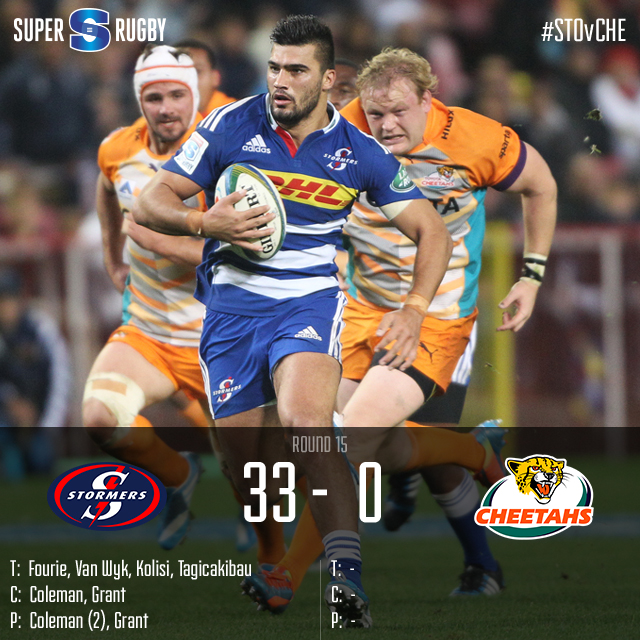