The Stormers thrilled the Newlands faithful as they turned on the style with a 52-15 victory over the Sunwolves in Cape Town.

Stormers tries from EW Viljoen, Seabelo Senatla, Damian Willemse, a brace from Dillyn Leyds and a Cheslin Kolbe hat-trick proved too much for the Sunwolves who scored through Teruya Goto and Takeshi Hino.

The Sunwolves coaching staff would not have been happy as their discipline let them down as early as the fifth minute when centre Derek Carpenter was yellow-carded for tackling a Stormers player without the ball.

Soon after, the Stormers capitalised on their numerical advantage by scoring the first try of the game. The ball was hacked through from the ruck and Kolbe raced on to it to dot down easily under the posts. Damian Willemse slotted the conversion as the home side took an early 7-0 lead.

Yu Tamura pulled a penalty back for the Sunwolves before the Stormers got their second try of the game. After a few strong carries around the fringes drawing the Sunwolves defenders to the ruck, the Stormers went out wide and Nizaam Carr showed silky skills to put EW Viljoen through a gap for the outside centre to dot down.

Shortly afterwards, the Sunwolves responded. From a turnover won by Riaan Viljoen,  Matsuhashi made the break and went wide for Goto to score in the corner. Tamura added the extras to cut the deficit to four at 14-10 with a quarter of the game gone.

But it was the Stormers who had the last laugh of the first half. Dillyn Leyds made the break down the left flank and chipped over the top for Senatla to collect and dot down.

Five minutes after the interval, the Stormers had their fourth. Kolbe started the counter-attack from a Sunwolves kick and his pass set Leyds free who passed inside to Willemse. The 19-year-old showed a wonderful step and turn of pace to leave the Sunwolves defence for dead and race through under the posts.

The Stormers will be disappointed to have conceded soon afterwards, missing too many tackles as Hino bashed over.

With a quarter of the game to go, the Stormers got their fifth. Willemse passed on his outside to Nizaam Carr who swivelled creating the space for Leyds on the wrap around to burst through the gap before stepping the final Sunwolves defender to cross the whitewash.

Leyds capped a good performance when he grabbed his brace after slick build-up play as the Stormers took a 38-15 lead.

Kolbe scored next with a well-taken try as he sped through to chase down a kick and sprint through for his second try.

To cap it all off, Kolbe secured his second hat-trick in as many weeks when Leyds turned provider unselfishly after a good break from Senatla. 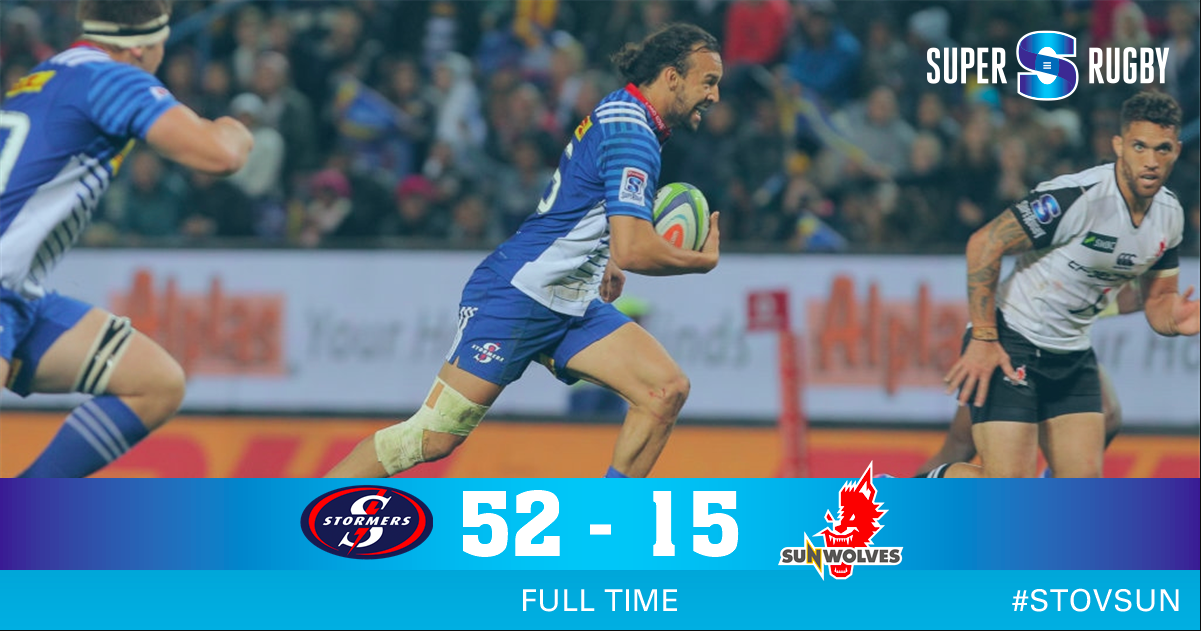