The Stormers outscored the Cheetahs two tries to one on the road in Bloemfontein to secure a 20-10 win on Saturday.

Tries respectively by Leolin Zas for the Stormers and Cheetahs' captain Francois Venter proved to the only scores of the first half in a surprisingly cagey contest.

Low skills levels affected both sides' ambitions to play with plenty of width and pace as the game featured a number of high tackles, Springbok lock Lood de Jager taking a yellow card as a result in the second half.

Sikhumbuzo Notshe's try for the visitors proved to be the crucial go-ahead score after the break before Fred Zeilinga and Kurt Coleman traded late penalties, but the Cheetahs couldn't find a way to snatch the result from the visitors.

Their inability stemmed partly from the Stormers' utter domiance in the lineout, with Eben Etzebeth, named Man of the Match, and Pieter-Steph du Toit stealing opposition ball in key areas time and again.

After a good outing against the Jaguares pack last week the Cheetahs' scrum again showed plenty of power, with Charles Marais notably getting stuck into Vincent Koch early on.

Another misfiring Cheetahs' lineout led to the opening try by Zas, as the Stormers attacked with quick hands and an excellent final pass from Cheslin Kolbe released the winger up the touchline to score. Robert du Preez converted for a 7-0 lead.

A response though wasn't far behind for the hosts, as their two centres combined for a score. William Small-Smith's pass released Venter through a hole up the middle and he had too much pace for the covering defence.

Neither side were able to take the lead before the end of the first half, leaving the scores tied up at 7-7.

Ten minutes after the interval the Cheetahs lost key lock De Jager to the bin and although the Stormers were initially held out, a second try wasn't far away.

Persistent pressure on the Cheetahs' defence ended with a try for flanker Notshe as he burst through into open space with no Cheetahs defenders in sight.

Kurt Coleman added the conversion having earlier replaced Robert du Preez, the 22-year-old departing with a worrying knee injury after his impressive debut in Round 1.

A penalty from Fred Zeilinga allowed the Cheetahs to close the gap after Du Toit was ruled to have not rolled away.

Coleman though replied swiftly with less than ten minutes to go, and his second penalty settled the result at 20-10.

The Cheetahs had one final chance to possibly secure a losing bonus point, but typically another poach from Etzebeth at the lineout settled a contest that had promised to deliver more, but never hit the heights.

Meanwhile the Stormers now have two wins out of two, strengthening their grip at the top of the Africa One group. 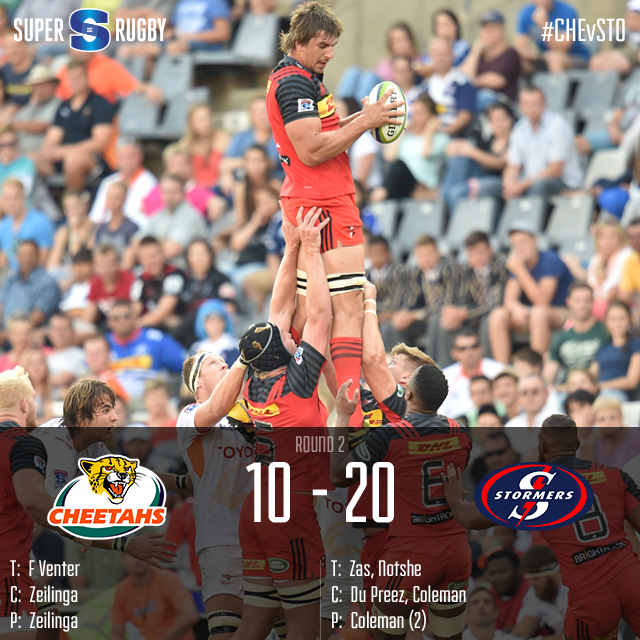