The Chiefs moved provisionally top of the Super Rugby standings on Saturday after they saw off an impressive and committed Sunwolves side 27-20.

The Chiefs moved provisionally top of the Super Rugby standings on Saturday after they beat an impressive Sunwolves side 27-20.

A brace of tries from star player Damian McKenzie and one apiece for Hika Elliot and Solomon Alaimalo saw the Chiefs run out winners, but they missed out on the bonus point due to Fumiaka Tanaka and Derek Carpenter's crossings.

The Sunwolves, who performed admirably throughout the match, will be pleased to take a losing bonus point from the game with their tough tour continuing next week at the Jaguares. If they play like this though they should fear no one.

The Chiefs, despite going in 20-3 to the good, did not have things all their own way in the first half in Hamilton as the Sunwolves should probably have gone in much closer on the scoreboard. However, they didn't accrue points in the Chiefs red zone and thus were made to pay.

The New Zealanders had no such trouble early on as pressure following a line-out saw hooker Elliot barge over the line from five metres out for a try what was an unconverted, with McKenzie's strike poor. McKenzie was solely on kicking duty for this match over Aaron Cruden.

Credit to the Sunwolves though as they bounced back from that blow admirably, launching a sustained period of pressure on the Chiefs line. But after snubbing kickable points and following several offences from the hosts on their own line, the Sunwolves could not convert.

Finally they had something to show for their efforts on 21 minutes when they decided to cut their losses after Dominic Bird came offside.

However the Chiefs rallied well with a slick try that saw Cruden find McKenzie who passed to Alaimalo on the right for the seven points.

Nine minutes later McKenzie added another three points off the tee to make it 13-3 and a moment of class from him just before half-time on the left wing meant the lead was up to 17 at the break. How he slipped past three tacklers was an staggering piece of running.

The Sunwolves came out for the second half determined not to let the game get away from them and when Tanaka crossed, dotting down against the post after yet more pressure on the Chiefs line, suddenly it was game on at 20-10. In fairness the Chiefs were lucky not to lose a man. 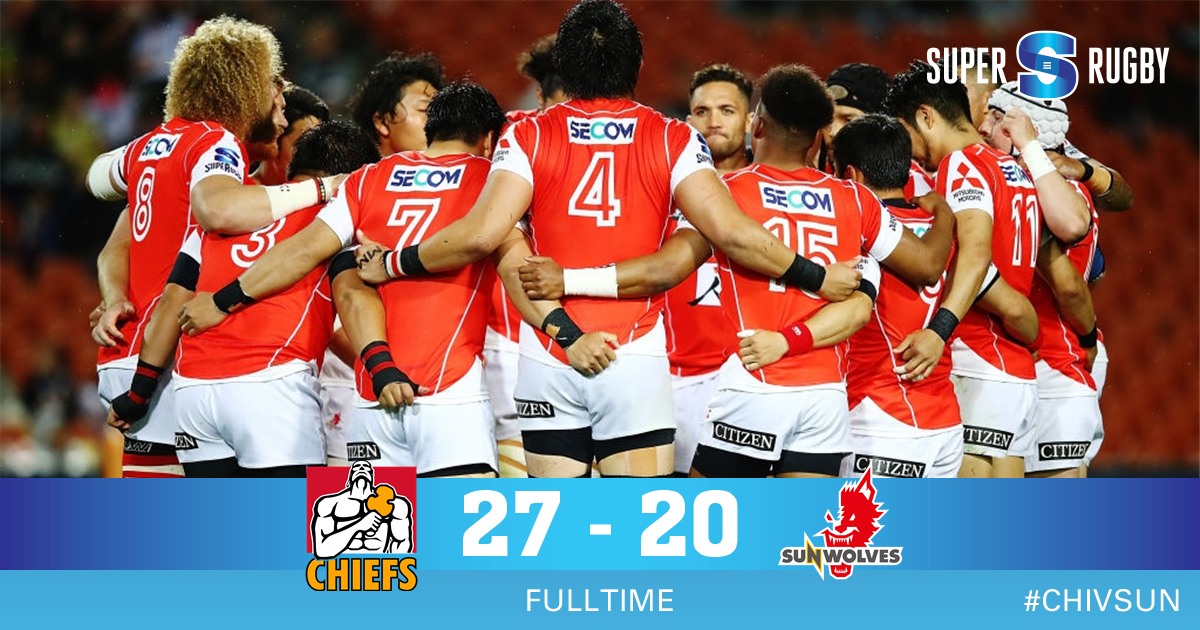 But the class of the Chiefs eventually told as with James Lowe off the bench, he set up McKenzie for a classy score which started from his own half, with the full-back swerving his way through from 35 metres out. He landed the simple kick as the bonus-point was back on.

The Sunwolves weren't done though as an inside ball and then offload to Carpenter saw the centre slide over to chalk off that extra point.

On 74 minutes, however, the Chiefs were more worried about holding on for the win as Taulagi's penalty brought matters back to 27-20.

They came close to reclaiming the bonus but a knock-on at a ruck saw Shaun Stevenson's crossing wiped off as the Chiefs had to settle for four points, despite a yellow card for Carpenter (knock down) and red for Taulagi (shoulder charge).