In the wake of Israel Dagg’s 100-game celebration earlier in the year, it’s time to bring the banners out again for the Crusaders as Matt Todd prepares to run out for what will be his 100th Super Rugby appearance, all for the Christchurch squad

In fact, it will make their centurion contingent more than twice as large as any other New Zealand team in the competition, and two more than any other team. Both the Reds and Waratahs, who will face each other in an Australian derby this round, rank in next best with five players boasting 100 or more appearances in Super Rugby. 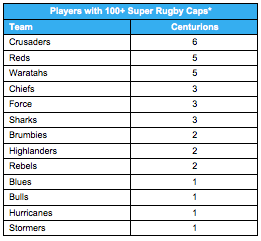 The Crusaders’ opponents this weekend, the Cheetahs, are one of five teams in the competition not to have a single player with triple-digits worth of Super Rugby experience.

The Cheetah’s most capped player, Francois Uys, has played just 85 games in the competition, a number eclipsed by nine players to have taken the field for the Crusaders this season.

This will be the fifth time that Matt Todd has faced off against the Cheetahs and after his last performance we can be sure that he’ll be another crucial cog in the Crusaders’ machine.

Todd starred in the Crusaders’ 57-14 victory against the Cheetahs in Round 6, 2015, putting in the best performance of any forward on the park. His 72m from 10 carries were more than any other forward in the game, and he supported those runs with two cleans breaks, four defenders beaten and two offloads.

While his wasn’t asked to do much defence in what turned out to be a Crusaders onslaught, he was impeccable from his four tackle attempts.

In fact, Todd has miss just one of his 29 total tackle attempts against the Cheetahs in his four previous games against them, and a brace of try assists in his last visit to Bloemfontein showed that he’s more than capable of setting up points for his team.