Seventeen regular season rounds are done and dusted for Super Rugby 2017 and eight of the 18 hopefuls have qualified for what is sure to be an exciting Finals Series. Half of the representatives hail from New Zealand, with a further three from South Africa, and the Brumbies flying the flag solo for the Australian contingent.

Among them lies a distinct disparity in how they’ve performed for the season to date. The Hurricanes and Lions, finalists from an exciting 2016 campaign, lead the way in terms of raw point-scoring ability. Both have amassed an average of more than 39 points scored per game this season, which is nearly double what the defensively minded Brumbies have put on the board. The Wellington side haven’t had to rely on goal kicking, either, pitching only 70% of their attempts at goal on course. 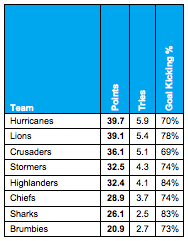 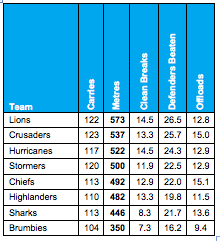 The Highlanders and Sharks are the only remaining teams to have hit more than eight-in-ten goal attempts through the posts, while the Crusaders (69% success rate) will certainly need to up the ante on their place kicks if they’re to keep in touch with a tight end to the tournament.

When it comes to yardage, the half-kilometre mark splits the remaining eight sides, with four averaging 500m or more per game this season and four averaging less.

The Lions, again, lead the way with an average of 573m gained per game this season (thanks largely to a Super Rugby era (2011-) record 1,214m against the Sunwolves in Round 15) while Brumbies bring up the rear, averaging far fewer carries and metres gained than any other the remaining eight teams.

The ACT side aren’t too far behind in clean breaks made, particularly given their reduced carry output this campaign. In fact, while they’ve made the fewest clean breaks of any remaining team, they’ve also conceded the fewest per game (6.1) of any team in the entire competition.

The Chiefs are the most likely of any of the final eight to promote second-phase play, averaging more than 15 offloads per game. The Crusaders also average 15 offloads per game this season, though none of the remaining six finalists have been as productive. 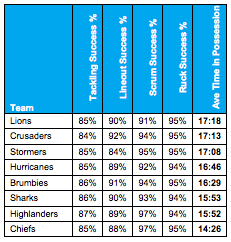 The Chiefs have certainly been among the most efficient teams in the competition. The Hamilton club are the only club of the remaining eight to average fewer than 15 minutes of time in possession per game this season, and average nearly three minutes fewer than the category-leading Lions.

The Australian representatives have been among the strongest at the set piece, and are one of only two teams remaining to boast a success rate above 90% at both the lineout and the scrum. The Crusaders have also managed to do so, but are weighed by a tackle success rate of just 84%, which is the lowest among any of the eight teams to have survived the regular season.

Each of the eight teams have definite strengths as they look to progress past the opening round of the Super Rugby 2017 Finals, and each will also have their weaknesses, but who will come out on top this weekend?