The Crusaders moved top of the New Zealand Conference on Friday as they picked up a 45-17 triumph over the Force in a damp Christchurch.

Digby Ioane, Matt Todd, Scott Barrett, Luke Romano, Codie Taylor, David Havili and Ben Funnell scored their seven tries as the seven-time winners made it five wins from five to jump above the Chiefs, who this week have a bye.

The Force crossed twice in the game, through Alex Newsome and Chance Peni, and despite a spirited effort were well beaten in the end.

The Crusaders came out firing and didn't take long to make an impact, scoring the first of four first-half tries after just three minutes. Ioane was the scorer after Mitchell Drummond's smart break and pass allowed the right wing a simple job of diving over under the uprights.

Jono Lance cut the lead off the kicking tee four minutes later but the Crusaders got over again on 16 minutes when returning flanker Todd showed intelligence to ground the ball on the base of the post. With Mitch Hunt again having a simple conversion, the margin was 11 points.

At this point it looked as though the Crusaders were set to run away with matters. But then a stray pass from Todd was gobbled up by wing Newsome and he raced to the uprights, thus reducing the arrears to 14-10. Even the Force would admit to being fortunate to be that close.

Normal service was resumed for the hosts in the next 10 minutes as first blindside flank Barrett barged his way over from close range and then lock Romano spotted no offside due to the ball being over the Force try-line and duly dived on it. That left the Crusaders 28-10 up.

The Force though would end the half strongly and were rewarded for their efforts after the siren when wing Peni got over to make it 28-17.

After the break the Crusaders set about putting the bonus point beyond doubt and on minute 50 they had it in their grasp once again, with hooker Taylor at the back of a driving maul on the right side of the field. Hunt was unsuccessful with the conversion but the lead was 15.

The wet weather wasn't helping the match as a spectacle at this point, as the Force looked to turn the screw at scrum time. They knew that scoring their third try would give them a good deal of hope of claiming at least a losing bonus point from a difficult Super Rugby venue. 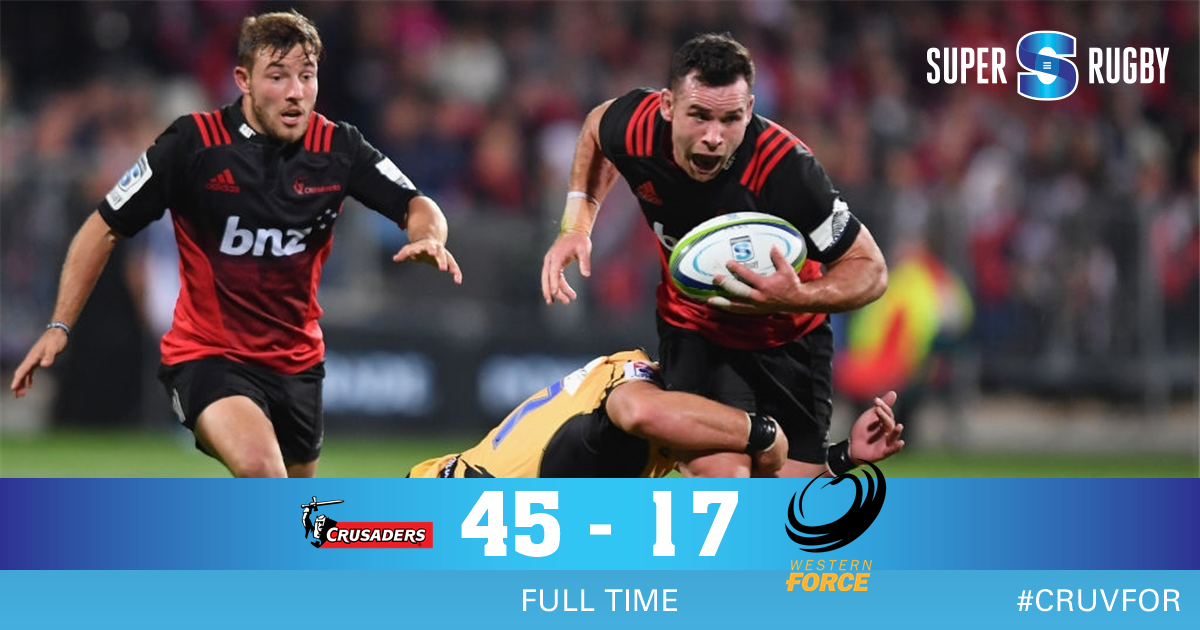 Helping their cause was the referee Rohan Hoffmann's decision to send replacement prop Tim Perry to the sin-bin for repeated infringements.

They came agonisingly close to crossing on 66 minutes when a quick tap from scrum-half Ryan Louwrens led to Luke Morahan almost collecting over the line. But the full-back couldn't hold on and one felt that maybe was the Force's last real chance to set up a grandstand finish.

So it proved as a yellow card for Force flanker Isi Naisarani, which was somewhat harsh, preceded the Crusaders getting into the 22 where full-back Havili squeezed over to make it 40-17 with the conversion.

That wrapped up the try bonus-point for the hosts and there was still time for one further try as replacement hooker Funnell went over off the back of a driving maul to make it seven crossings in this simple victory.