Unbeaten Sharks slay Reds to stay top of the log

The Sharks maintained their perfect start to the 2014 Super Rugby season by seeing off the Reds in Durban with a 35-20 victory.

Losing Paul Jordaan and Pieter-Steph du Toit in the same week might have understandably derailed the Sharks, but not so.

This was a cutthroat display from Jake White's men, pouncing on any hint of indiscipline from the Reds in the opening half together with Willem Alberts' try.

The 2011 champions brought themselves back into the contest thanks to tries in the second half from Mike Harris and Will Genia, but the deficit was too large for them to overcome. Dale Chadwick extinguished any hopes of a bonus point with his late try.

The early breakdown battle saw the Reds match the Sharks for physicality, particularly when attacking the hosts 22 as Cooper added two penalties.

Those were countered by strikes from Patrick Lambie, back after missing last week's win over the Lions due to illness.

A turning point came with Lambie's third and fourth penalties which rapidly succeeded each other, the Reds offending first at the ruck and then straying offside.

That six-point advantage was handsomely built upon through a try from Springbok flanker Alberts, his second of the season as he busted over from close-range following fine work from JP Pietersen and S'bura Sithole down the right wing.

It left the Reds hanging on at 19-6, Lambie's fifth penalty doing Richard Graham's team no favours as the visitors faced a mountain.

The Sharks were merciless, Francois Steyn using his monster boot to good effect as the Reds infringed again - the Sharks ahead 25-6 heading to the break. A botched score from Harris, untouched running in off a pass from Genia, rubbed salt into the wound.

Harris made no mistake with the first points of the second half however, running on the angle to take Cooper's pass and score the Reds first try.

The impact of their bench proved crucial as Beau Robinson's break created the space for Genia to coast over the line and haul the Reds back within eight points.

The sin-binning of Robinson stemmed the visitors fightback further, with the kicking game of the Sharks working well to pin the Reds back deep in their own half.

Charl McLeod's fingertips couldn't do enough to secure a second Sharks try after a brilliant chip through from Bismarck du Plessis, Lwazi Mvovo somehow missing the bounce of the ball beforehand.

They wrapped it up though shortly afterwards; Dale Chadwick shrugging off tacklers to power his way through for a try from close range.

It was a fitting ending, the Sharks doing enough to ensure the Reds left Kings Park with nothing and maintaining their run at the top of the South African Conference. 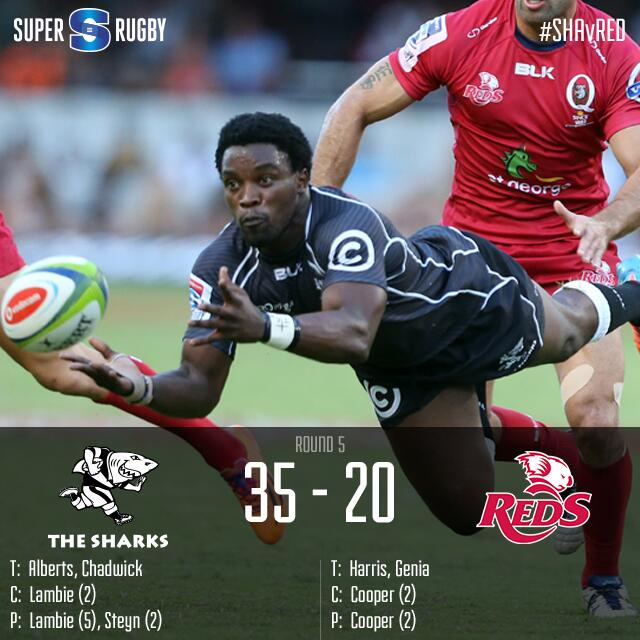