Winning- Is It All About Defence?

While it’s true that only four times in Super Rugby history has the team with the best defensive record in the regular season (fewest points conceded) lifted the trophy at the end of the campaign, effective defence against any opponent remains a cornerstone of a tilt towards championship success.

Acrobatic tries and sideline conversions might be more exciting, but the players making quality tackles in big numbers can often be single-handedly keeping their team in the competition. Already, some players have shown in 2017 that it’s their defence that has made them some of the most effective players in the competition.

The second-round clash between the Brumbies and the Sharks was one of the closest games in recent memory; only a try after the final buzzer securing a win for the South Africans. 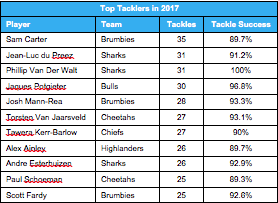 Only two of the top 10 tacklers in the competition ply their trade for New Zealand teams, though it’s no surprise not to see any Hurricanes in the mix after their comprehensive brace of wins, in which they’ve enjoyed most of the ball.

With their players featuring heavily in the individual best tacklers for Super Rugby 2017, it is no surprise to see the Brumbies and Sharks at the top of the team defensive rankings this season.

The Brumbies have maintained the best tackle success rate despite averaging 159.5 tackles per game this season, over 17 more than any other team in the competition and nearly twice as many as the next busiest Australian team; the Rebels’ 88 tackles per game is next in line.

The Hurricanes have been the most effective New Zealand team when it comes to making their tackles stick, though they’ve notably been required to make far fewer tackles overall than the top two defending squads. The key though is that when they do have to defend, they do it well, and whoever goes on to lift the trophy at the end of this season will need to have a strong defensive unit.