New Zealand made it three wins from three in the Rugby Championship as they comfortably saw off Argentina 36-13 in Brisbane on Saturday.

This encounter was not as one-sided as last weekend's Test on the Gold Coast, but the All Blacks still claimed a bonus point as they outscored their opponents five tries to one.

Tupou Vaa'i led the way with a brace of five-pointers while Patrick Tuipulotu, TJ Perenara and Samisoni Taukei'aho also dotted down and Jordie Barrett finished with an 11-point haul after adding four conversions and a penalty.

Emiliano Boffelli scored all Argentina's points courtesy of a try, a conversion and two penalties.

New Zealand were fastest out of the blocks and opened the scoring after five minutes when Tuipulotu crossed from close quarters after a superb line break from Hoskins Sotutu in the build-up.

McKenzie added the extras before Boffelli reduced the deficit shortly afterwards courtesy of a penalty after Ethan Blackadder was blown up for obstruction.

New Zealand had the bulk of the possession during the next 10 minutes but Argentina did well on defence and a Jordie Barrett penalty in the 13th minute was the All Blacks' only reward during that period.

In the 17th minute, slick handling and inter-passing between New Zealand's forwards and backs from broken play saw Will Jordan crossing the whitewash but referee Jaco Peyper correctly ruled out his try due to a forward pass from Taukei'aho to Jordan.

Five minutes later, Jordan gathered a chip kick from McKenzie in Argentina's half before offloading to Rieko Ioane, who went over under the posts but once again the final pass went forward and that effort was also disallowed.

The All Blacks continued to dominate and in the 29th minute they attacked off the back of a scrum on Argentina's 22 and Perenara forced his way over the tryline after gathering a pass from Hoskins Sotutu.

And just before half-time, Vaa'i rounded off a flowing move, in which the ball went through several pairs of hands in the build-up, and the All Blacks were cruising with the score 24-3 in their favour at half-time.

The second half started with Boffelli adding another penalty but it wasn't long before the All Blacks regained the initiative courtesy of Taukei'aho's try after great offloading from Will Jordan and Ardie Savea in the build-up.

Despite that setback, the Pumas did not surrender and they were soon on the attack inside the All Blacks' half. The South Americans' attacking endeavour was rewarded in the 52nd minute when Santiago Carreras delivered an inch-perfect cross-field kick which Boffelli gathered before scoring in the left-hand corner.

Boffelli showed his class as he landed the difficult conversion from close to the touchline and with the score 29-13 to the All Blacks, the Pumas were more energetic during the rest of the match.

Although Argentina did most of the attacking for the next 25 minutes the All Blacks also had a chance to increase their lead but after doing well to charge down a clearance kick close to the Pumas tryline, Finlay Christie failed to regather the ball while crossing the whitewash.

In the game's closing stages, Quinn Tupaea won a turnover inside Argentina's half and the All Blacks soon launched a counter attack. The ball came out to Scott Barrett, who offloaded out of the back of his hand to Vaa'i, who crossed for his second try which also sealed his side's victory. 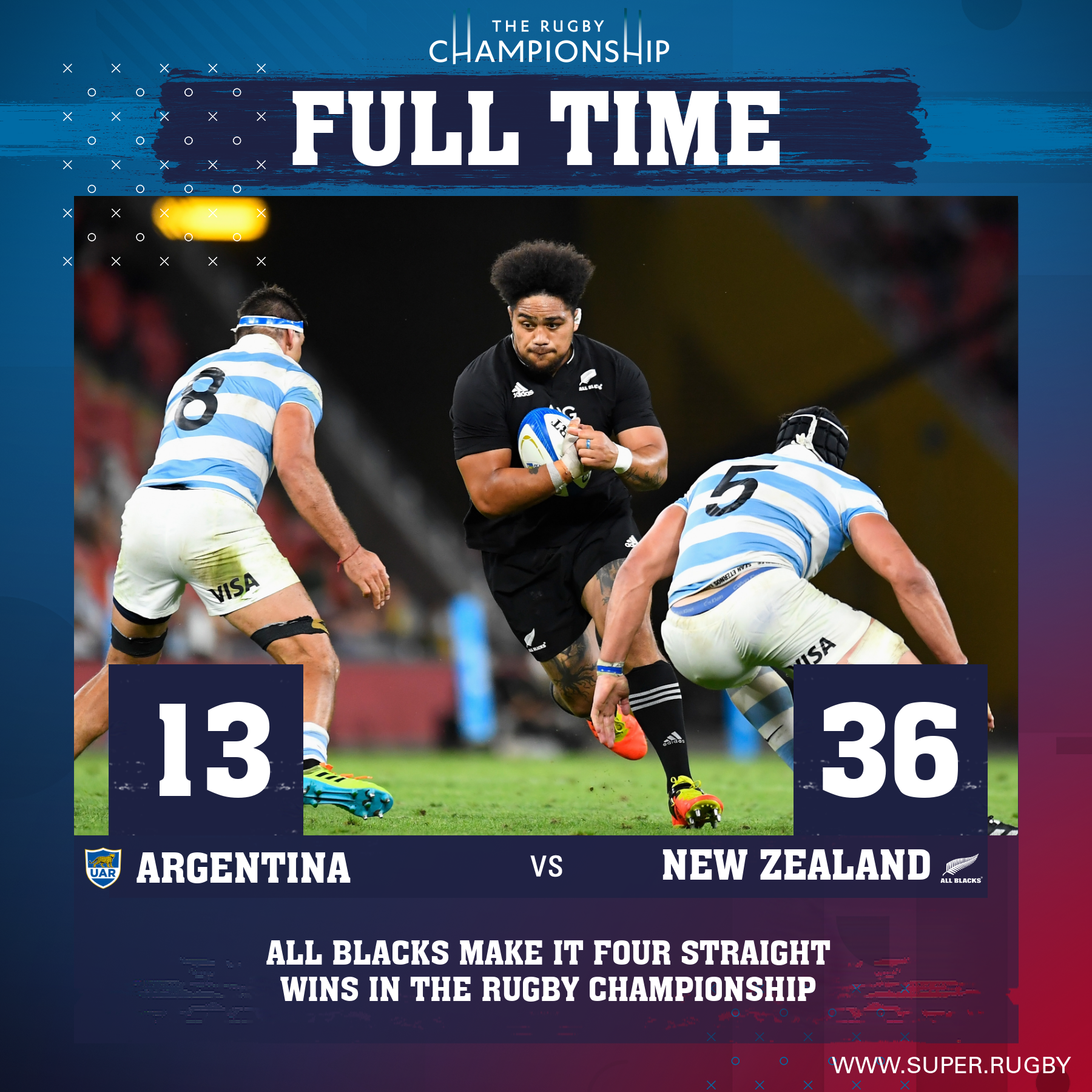